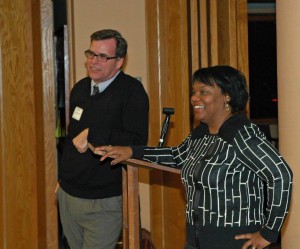 A record audience turned out for this especially timely program. Attendees lingered long after the meeting was adjourned to continue the discussion of the speakers’ personal experiences with racial injustice and their approaches for addressing it.

Rob Good said white privilege has opened doors for him that remain closed to nonwhites. Being white, he said, has provided him with numerous benefits such as access to job opportunities, medical care, and the ability to afford to live in a good neighborhood. Racial disparities are often not readily apparent to whites.

Because of access to money accumulated by earlier generations, the average white family has 13 times the wealth of the average black family and 10 times that of the average Hispanic family, he said, and nonwhites have higher rates than whites of Infant mortality, cancer, and heart disease. Amy Hunter described her experience with racial discrimination that prevented her from renting an apartment in Clayton.

Recently, discrimination in the criminal justice system has become especially visible. Good pointed out that Ferguson records show police are more likely to find illegal things when they search whites, yet they search blacks more frequently than whites. Hunter said she feels powerless to protect her two sons from danger in dealing with law enforcement.

But rather than dwelling on past injustices, Hunter focused on positive signs emerging in the wake of Ferguson. “This could be our moment of pride,” she said. She encouraged the mostly white audience to “question all the time” when they see a situation that seems racist. The way to reach racial equality is to work strategically to change structures and systems that perpetuate racial discrimination, she insisted. “If women could work together on this, this could be rock star!” she said, “but we have to be committed.”

More about our speakers: Amy Hunter is responsible for ensuring that eliminating racism, part of the YWCA’s mission, is incorporated in all the organization’s programming. She has provided strategic direction for organizational development for universities, school districts, and the corporate community. She has published and is a presenter on issues of race and social justice throughout the United States and Canada. She is pursuing her doctorate in Social Justice from the University of Missouri St. Louis. Rob Good teaches U.S. History and U.S. Government & Politics at Ladue Horton Watkins High School, where he serves on the African American Academic Achievement Committee, facilitates the STRIDE (Students Taking Rigorous Instruction Developing Exceptionally) program, and co-sponsors the Gay-Straight Alliance. He has facilitated diversity workshops and dialogue groups for A World of Difference, the National Conference for Community and Justice, the Episcopal Diocese of Missouri and Focus St. Louis. 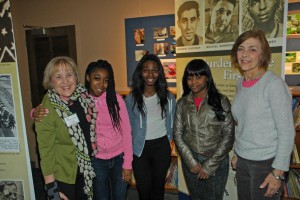 Risking Everything: A Freedom Summer Exhibit. Students from Northwest Academy of Law High School brought a photo anddocument exhibit on the Freedom Summer of 1964 to the meeting. This series of panels from the Wisconsin Historical Society features the stories of ordinary people who braved police shotguns and Klan firebombs to secure basic rights. Go to www.wisconsinhistory.org/freedomsummer for more information. Documents are also available at fsxbt.tumbler.com.

Black Lives Matter: Yard signs with the slogan “Black Lives Matter” were available at the meeting for a $5 donation. The signs are designed to spark discussions throughout the St. Louis area about how to make changes in society to ensure that blacks and other minority populations have the same opportunities as whites, especially in education, employment, and criminal justice.