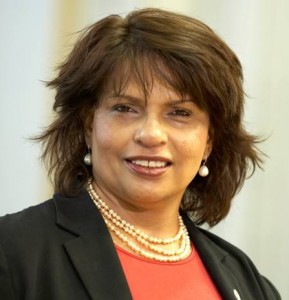 Perhaps no city in the country is a more tragically appropriate location than St.Louis to focus on the trauma children experience when they’re exposed to gun violence. Just 24 hours before the March 12 meeting, six-year-old Marcus Johnson died of gunshot wounds during a traffic dispute at O’Fallon Park in north St. Louis. His teenage brother and an adult family friend also were injured. Three other siblings were not hit by gunfire, but they are victims, too. How will they cope with what they saw happen to their brother? How will it shape the direction of their lives?

The facts are horrific: Children’s Defense Fund statistics report that a child or teen dies or is injured from guns every 30 minutes. Duru Sakhrani, MD, outlined how exposure to violence affects brain development, behavior, and long-term mental and physical health. “Reaction to trauma can be measured by the intensity, length and repetition of the violence,” she said. In the weeks following the violence, victims experience social and emotional conditions ranging from depression to acute stress disorder, characterized by fear, terror, or violent play. Months or years later, these victims can develop post-traumatic stress disorder and long-term conduct disorders that lead to crime and violent behavior in adulthood.

“Hypervigilance and agitation are frequent manifestations of exposure to gun violence,” Dr. Sakhrani said. “Children mirror what they’ve been exposed to.” Therapy is essential, but teachers, volunteers, and family members play critical roles, too. “The healing strategy must be infused with love,” she told the audience. “Make eye contact, listen, show them you care.” As devastating as the months following Michael Brown’s shooting have been for our community, the aftermath of Ferguson is ripe with teachable moments.

Valerie Carter-Thomas shared one of her own teachable moments at Northwest Academy of Law: A few months ago, she confronted a male student about why a security guard had handcuffed him. (The guard was new and unaware that Carter-Thomas was not onboard with handcuffing pupils.) The student answered her rather heated questions by asking if she’d ever known him to be aggressive, to lie, to be anything but respectful. She quickly answered “no.” So why, he asked, was she grilling him instead of the security guard?

“I realized that in an effort to help some of our kids just stay alive, we ask them to become small, to be quiet, to comply without question,” she said. In implying that they should become as invisible as they can be, she said, “we are telling them that they are a menace, that they can’t expect the benefit of the doubt, that they don’t have the right to full protection under the law. That has to change, and we’re committed to making that change.”

Northwest is working on becoming a Trauma Sensitive School, an approach with proven strategies for reaching and teaching students whose ability to learn, to complete a task, and even to sit still has been shaped by violence and trauma. “Imagine trying to learn calculus when you feel like you have to have a gun to make it home every day,” Carter-Thomas says. Northwest has 400 students – 58 percent boys this year – and under Carter-Thomas’s leadership has been recognized for improvements in attendance, academics, and percentage of college-bound students. Success is hard-fought and hard- earned, however. “We teach and value perseverance,” says the dynamic, inspiring principal, who sees light at the end of a still long tunnel. “It’s a good time to be in the city, doing this work,” she says.

More Work for Gun Safety
The Women’s Voices Campaign for Common Sense Gun Solutions Committee recently launched Lock It For Love, a program that provides free gun locks to households where children live or visit. Supported by the Deaconess Foundation, Lock It For Love works with members of the St. Louis City and County Police Departments to demonstrate how to use the locks. For more information or to schedule a lock giveaway event, email gunsolutions@womensvoicesraised.org.

Black Lives Matter
Yard signs with the slogan “Black Lives Matter” were available at the meeting for a $5 donation. The signs aim to spark discussions about how to ensure that blacks and other minority populations have equal opportunities, especially in education, employment and criminal justice.