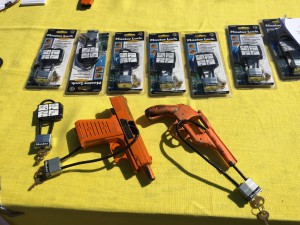 Beautiful weather, a wonderful celebration and a large crowd kept Fran Milsk, Susan Talley and Carol Wofsey busy at the Oktoberfest in North Riverfront Park.   They discussed firearm safety, demonstrated how to use gun locks and gave away a record 60 locks.

The only photo they had time to take was when they were setting up the display table.   Click on the photo to enlarge.   Lock It For Love now has two disabled firearms – a pistol and a revolver – to show how to use the cable locks. 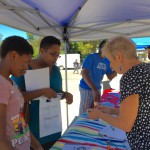 It was a beautiful day and we were pleased to see people who were interested in having gun locks to protect their children.

20 locks were distributed at the fair.   Thanks to Barbara Finch, Brigid McCauley, Mary Clemons and Ruth Ehresman for helping at the display table. 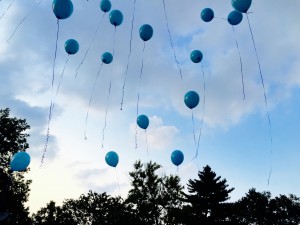 Andrea (and Bob) Bauman, Jeanne (and Bob) Bubb, Mary Clemons and Barbara Finch of the Women’s Voices Lock it for Love Committee participated in a prayer vigil in Hanley Hills for Carter Epps, the 21 month old who died after shooting himself with an unsecured gun. After the program we distributed gun safety information, demonstrated the use of the locks and gave away approximately 25 locks. 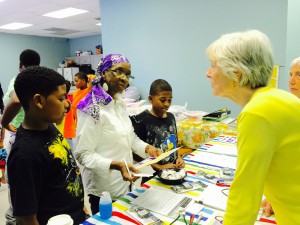 Under a cloudy sky in South St. Louis youngsters climbed a rock wall and jumped and played in bounce enclosures.  But before play, they had to visit exhibits.  Women’s Voices Lock It For Love members Andrea Bauman, Lise Bernstein, Mary Clemons, Barbara Finch and Susan Talley talked to them about gun safety and what they would do if they found a gun.   For the adults accompanying the children, gun locks were demonstrated and given free to those who requested one. 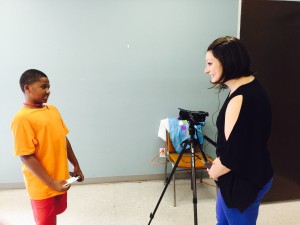 A young boy, with the permission of his mother,  described what he learned from our display when videotaped by Lauren Trager of Circuit Attorney Jennifer Joyce’s office. 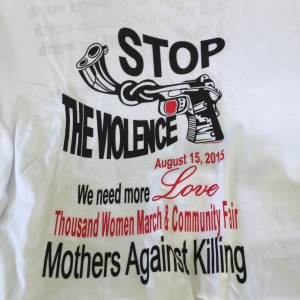 Back to School Store  – 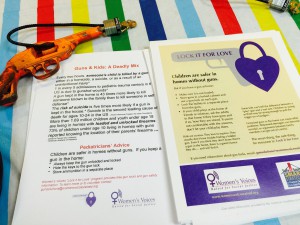 grandparents and other family members at the National Council of Jewish Women’s Back to School Store. Thanks to Carol Wofsey, Mary Clemons, Norma Line, Lise Bernstein and Fran Milsk for their help with this event.

This was the 15th year of Back to School Store; 1,200 children shopped for new clothes, shoes, winter coats and school supplies.  The project is funded through grants and individual’s donations. 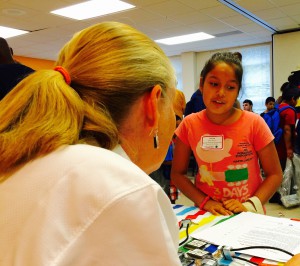 Talking about what to do if you find a gun 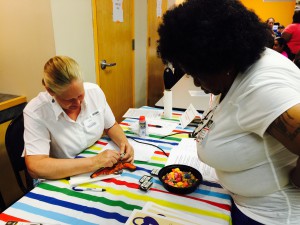 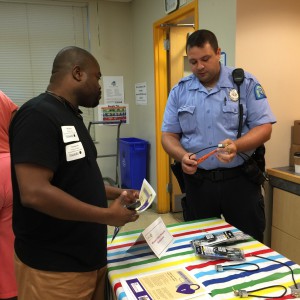 Officer Berkley of the St. Louis Metropolitan Police Department demonstrates various way to use the lock 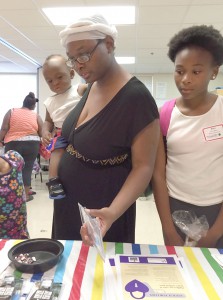 A mother getting a gun lock to keep her family safe 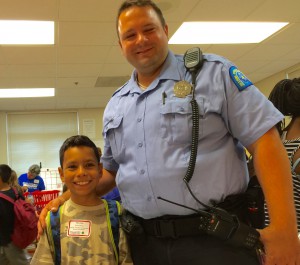 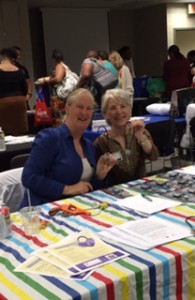 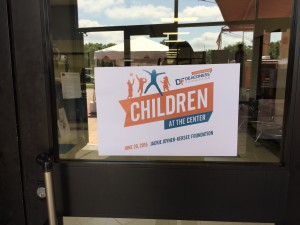 And on June 20th, 30 gun locks were distributed at the Deaconess Children at the Center event at the Jackie Joiner Kersee Center in East St. Louis. 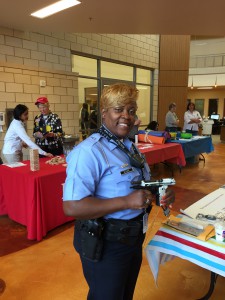 Carol Wofsey, Ruth Ehresman and Mary Ann Meyer of the Lock It For Love committee distributed 25 gun locks Saturday, May 9 at a parent fair at the O’Fallon Recreation Center in St. Louis.  They were assisted by Regina Moore, a St. Louis Metropolitan Police officer. 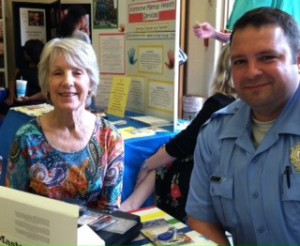 Members of the Campaign for Common-Sense Gun Solutions Committee launched a new round of Lock It For Love events on Saturday, April 18, at the Family Resource and Fun Fair at the Youth Learning Center on Olive St. Officer David Berkley, fifth district community outreach officer with the St. Louis Metropolitan Police Department, joined WV members Ruth Ehresman, Barbara Finch, Susan Talley and Mary Schuman to talk about the importance of gun locks and give away locks to families who needed them.