The Department of Education changes to Title IX narrowing the definition of sexual harassment take effect August 14, 2020. Women’s Voices opposed the changes for the reasons cited in this graphic: 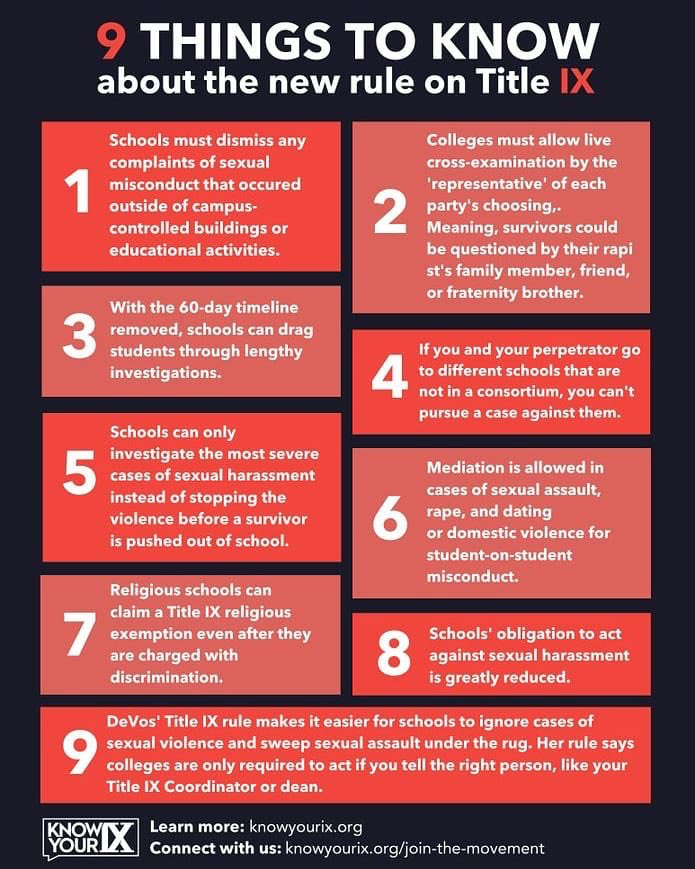 The American Association of University Women has launched a campaign to ensure that there are resources in the right hands to help students and survivors. One part of the campaign is to support the Gender Equity in Education Act. You can urge your congressperson to support it here.

A federal commission headed by Secretary of Education Betsy DeVos released a long-awaited school safety report today that recommends, among other things, that the Department of Education abandon Obama-era policies aimed at protecting children of color from excessive discipline in school. The 177-page report says that disciplinary decisions should be left to classroom teachers and local administrators who should not have to follow guidance issued by the federal government….

…Research shows that when students are suspended, expelled or arrested, they are more likely to drop out of school and suffer negative consequences. Critics of discriminatory discipline, including the ACLU, have called it the “school to prison pipeline.”…

…A survey of superintendents found that only 16% had modified their disciplinary practices because of the Obama policy, but of those that made the change, 44% said it resulted in a positive experience and 4.5% said the experience was negative.

Two former Obama administration education secretaries, Arne Duncan and John King, criticized the commission’s report in a statement. “Today’s recommendation to roll back guidance that would protect students from unfair, systemic school discipline is beyond disheartening,” they wrote.

Note: A report released in October, 2017 found that black students in Missouri were 4 times as likely to be suspended as white students. The report detailed the ways in which black students and students with disabilities are disproportionately suspended, arrested and otherwise disciplined in Missouri schools. See here

Suspensions Are Down In U.S. Schools But Large Racial Gaps Remain

Students in U.S. schools were less likely to be suspended in 2016 than they were in 2012. But the progress is incremental, and large gaps — by race and by special education status — remain.

The Child Trends analysis highlights findings that when a student disrupts class, a school can disrupt that student’s education — and his or her entire life. Research suggests suspension and expulsion, arrests and referrals to law enforcement, is associated with dropping out of schooland going to jail. All of these consequences happen more frequently to black students, even in preschool.

Who Was Linda Brown? What has Changed in Last 64 Years?

March 30, 2018-The New York Times Race & Civil Rights Reporter discusses what has and hasn’t changed since the Brown v. Board of Education case. Listen here

The Missouri legislature gave final approval to a bill that would create a rating system to evaluate and improve child care quality.

It’s a move proponents say will pave the way for the state to compete for millions of dollars of federal grants for early childhood education, while giving parents a set of point-scale ratings on how well day cares are performing. Read more here

Advocates in the child-care community have long lamented the dearth of qualified child-care providers, particularly in poorer communities. A new apprenticeship program is working to address this. Click here.

Money talks, but what is it saying to our children?

Our current system will continue unless we all take responsibility to make changes. Read commentary on education equity published in the St. Louis Post-Disptach, written by co-presidents, Mary Clemons and Ruth Ehresman and co-founder, Barbara Finch.

Schooling Successfully During and After COVID-19

At the January 12, 2021 Lunch & Learn, we heard from Dr. Art McCoy, superintendent of the Jennings School District. COVID-19 demands a new approach to school and learning. Jennings was the only district in St. Louis to resume in-person schooling in July 2020, and it has had no student coronavirus cases. Dr. McCoy shared how his district successfully returned students safely to the classroom and what needs have been highlighted in doing so. Read the program summary here.

“The Politics of Funding Preschool Education”

“What We Learned From the St. Louis Desegregation Program”