​About Our Gun Violence Work:

Our Campaign for Common-Sense Gun Solutions Launched on Mother’s Day 2013 with a full-page ad in the St. Louis Post-Dispatch See ad.

Our Lock it For Love program began in 2015 and provides gun safety information and free gun locks to parents and others to prevent unintentional shootings.

Along with the Jewish Community Relations Council, the Ecumenical Leadership Council, the Peace and Justice Commission of the St. Louis Archdiocese, and the St. Louis Violence Prevention Coalition, Women’s Voices was part of the Interfaith Vigil to Save Children’s Lives on October 25 at Mt. Bethel Missionary Baptist Church. This gathering served as a kickoff event for an interfaith effort to end gun violence in St. Louis. The event also provided an opportunity to mourn together after the school shooting at Central Visual and Performing Arts High School just the day before. A display of quilts containing images of the children who died due to gunshot wounds in the past several years was the backdrop for the vigil. Each child was remembered by name. Gun locks for the event were provided by the KC Bureau of Alcohol, Tobacco, and Firearms.

Participating congregations will have access to free supplies and services, including gun locks, gun safety training and more. Interested congregations can register at bit.ly/interfaithxgunviolence

Missouri ranks in the top ten states with the highest rates of unintentional shootings by children, according to research from Everytown for Gun Safety. This reflects the trend in states with the laxest gun laws. Everytown states, “to become a safer state, Missouri can enact a law requiring background checks on all gun sales, repeal its dangerous permitless carry law, enact laws keeping guns away from domestic abusers, and enact an Extreme Risk law.” 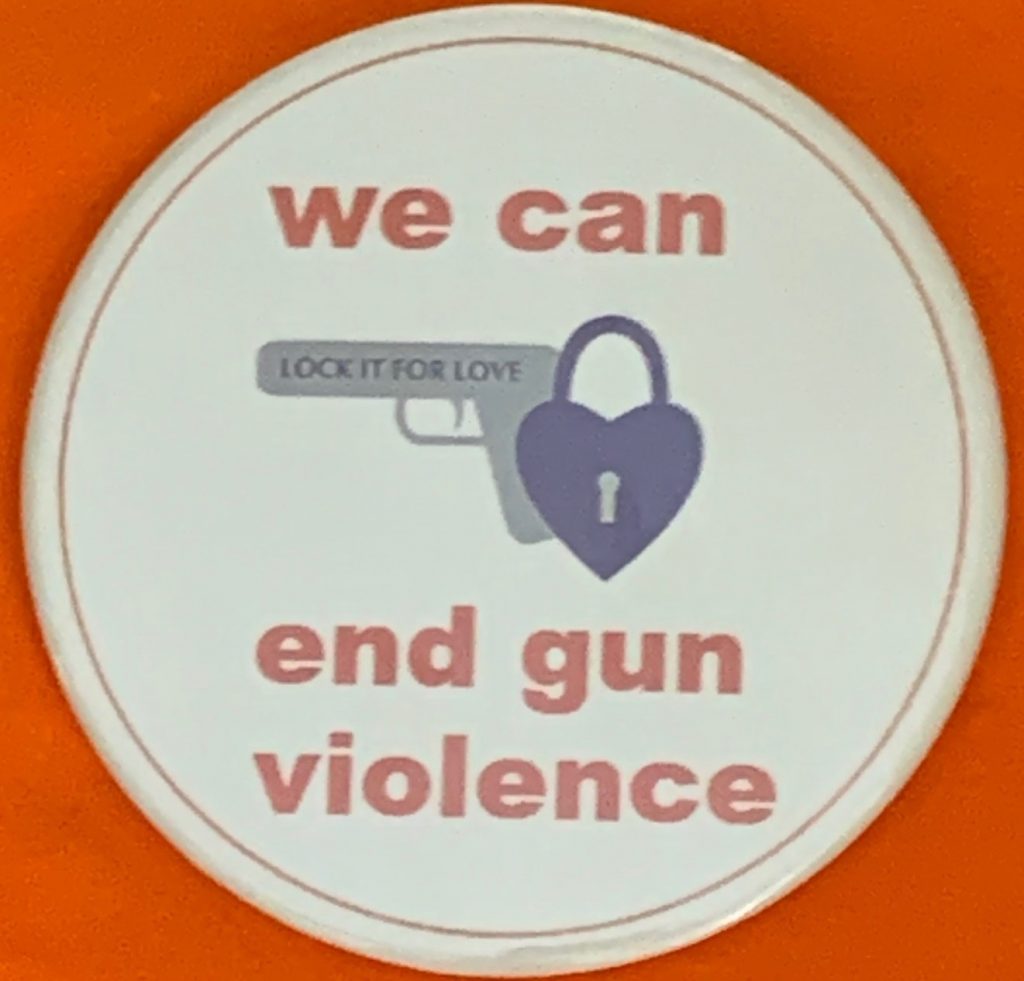 June 4 is National Gun Violence Awareness Day, a day to wear orange and honor the victims and survivors of gun violence. Everytown for Gun Safety explains, “Orange is the color that Hadiya Pendleton’s friends wore in her honor when she was shot and killed in Chicago at the age of 15 — just one week after performing at President Obama’s 2nd inaugural parade in 2013. After her death, they asked us to stand up, speak out, and Wear Orange to raise awareness about gun violence.

Guns are Not Essential 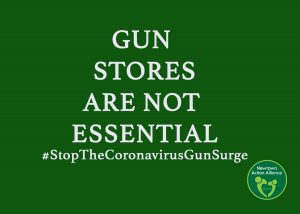 We encourage all governors and mayors to join Maine, Michigan, New Jersey, New Mexico, New York, and Washington and exclude gun stores from the essential business list in their Coronavirus executive orders. Panic purchases of guns and ammunition during the national emergency will result in more lives lost. The last thing we need during a pandemic are more guns and ammunition in our homes and in our communities. “The Trump Administration should protect all children from gun violence, not gun profits”, said Clai-Lasher Sommers, Executive Director of States United to Prevent Gun Violence.

“The Trump Administration is allowing the gun industry and the lobby to exploit the coronavirus pandemic to sell more guns. Meanwhile, we are seeing reports of spikes in calls to domestic violence and suicide hotlines all across the country, a trend that’s appearing around the world as we continue to fight the coronavirus pandemic. Our leaders should be warning Americans of the danger of panic buying weapons, not deeming them essential”, said Igor Volsky, Executive Director of Guns Down America.

The article reports that “in the past three years in Missouri, the suicide rate among teens ages 15 to 19 increased 54% — from 9.7 to 14.9 deaths per 100,000, much higher than the nationwide average of 10.5….Anything that puts time and distance between the person and lethal means is helpful, advocates say. State laws requiring gun permits with background checks and waiting periods before purchasing a gun, as well as locking guns when not in use, have been associated with lower suicide rates.” Read the article here.

Why are so many black children killed in St. Louis?

This in-depth account of the deaths of 13 children in St. Louis since April, discusses the poverty and lack of hope and support in St. Louis, the availability of guns, the loosening of gun restrictions in Missouri and the history of segregation in St. Louis. Read the article here.

What makes the Virginia Beach shooting different from other massacres

Amna Nawaz of PBS talks with former Homeland Security official Juliette Kayyem about the use of a suppresser (gun silencer) in the Virginia Beach shooting.  “…you have a situation in which not only do people not know how to respond, but, as importantly, the police officers and the first-responders have both a muted sort of noise level and a capacity to know where that noise is coming from.”

Kayyem ends with, “Legislation has worked in the past, and it will work in the future.”

Click here to read the transcript or watch the 7 minute segment.

Removing Guns From Those Deemed a Danger to Themselves or Others

Several bills have been filed during the current Missouri legislative session that would temporarily remove guns from people deemed a danger to themselves or others. Nine states have passed “red flag” laws during the last year and “courts are issuing an unprecedented number of seizure orders across the country. Supporters say these “red flag” laws are among the most promising tools to reduce the nearly 40,000 suicides and homicides by firearm each year in the U.S. Gun advocates, though, say such measures undermine their constitutional rights and can result in people being stripped of their weapons on false or vindictive accusations.”  Read more here

From the St. Louis Post-Dispatch, January 4, 2019: “When Gov. Mike Parson’s administration proposed a plan to allow visitors to carry guns in the Missouri Capitol, they asked for comments about the policy from the public.”

“The response was an outcry of opposition. Every one of the 50 comments that flowed in between mid-November and mid-December opposed the plan, saying firearms should not be allowed in the building, even if the owners have concealed carry permits.”

Quoted in the article were Women’s Voices co-presidents, Mary Clemons and Ruth Ehresman, from the points made here in the letter submitted on behalf of 1,600 supporters opposing a rule change to allow gun owners with concealed carry permits the right to carry their gun into the MO State Capitol building.

Reasons we strongly opposed gun owners with concealed carry permits to carry their guns into the Missouri State Capitol building include:

For now, the change has taken affect; however with the public outcry of opposition, the rule may face review by the panel of lawmakers responsible for reviewing administrative rule changes. So now you can bring guns, but please no dogs in the Capitol! Read here.

No More Thoughts and Prayers 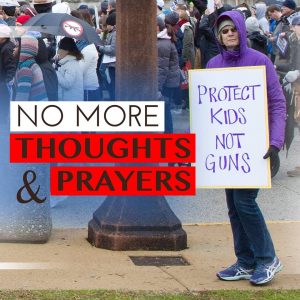 Documentary film about the March for Our Lives produced and edited by Women’s Voices members Angela Lamb & Michele Steinberg. This 19 minute film, made with documentary film maker Angela Lamb, includes interviews with Becky Morgan of St Louis Mom’s Demand Action and some of the teen leaders of the St. Louis march. Available on Amazon (free for Prime members) and on Vimeo

Success! Bill That Would Allow Concealed Firearms In Schools Fails

HB 1936, a dangerous bill that would force colleges to allow hidden, loaded handguns on their campuses, and allow guns in private schools, bars, and day care centers, did not come up for a vote in the Missouri legislature.

Women’s Voices president Lise Bernstein and Campaign for Common-Sense Gun Solutions co-chairs Barbara Harris and Mary Schuman wrote House Speaker Todd Richardson and MO House Majority Floor Leader Rob Vescovo asking them to not bring HB 1936 to the floor for a vote. They said the bill would allow concealed weapons on college campuses, churches, daycare facilities and bars will put more people at risk of being injured or killed. Read the letter here.

The Truth About Suicide & Guns

There are 20,000 gun suicides in the U.S. every year, more than 50 every single day. That’s more than half of all suicides and two-thirds of all gun deaths, according to the Brady Campaign to Prevent Gun Violence.

Research shows a gun in the home makes a suicide three times more likely. There are a few reasons why the presence of a gun in the home is a risk factor for suicide. First is the surprising impulsivity of many suicide attempts. Guns are also so much more lethal than other methods. Most people who survive a suicide attempt do not go on to die by suicide, but only one in 10 people who attempt suicide by gun get that second chance.

Limiting easy access to a gun for someone who considers or even attempts suicide can literally be the difference between life and death. Read more.

Missouri ranks 14th highest in the nation for the number of guns stolen from homes–30,697 between 2012-2015. A recent study study identified a few common traits of gun owners who are victimized by theft: Those who own many guns, those who regularly carry their guns outside their homes, and those who do not employ safe storage practices while at home face a higher risk of gun theft. Read more.

Get a Free Gun Lock!

Free gun locks are available to the public at the following locations:

Read member, Dr. Kristen Mueller’s, Commentary: “#ThisIsOurLane, but Our Lane  Needs All of Us: EM Physicians Speak Out on Gun Violence”

Click here to see our remembrance of the 37 Missouri Children killed by gun violence in 2017 or watch the video.

In 2016, Women’s Voices held a “virtual vigil,” creating an online list of every man, woman and child who fell victim to gunfire in St. Louis city or St. Louis county. Find it here on our page Remember the Victims

Up Close & Personal: On the Front Lines of Gun Violence

Students against Gun Violence: Young, Smart, and Mad as Hell! ~ A Panel Discussion

How a Gun Obsessed Culture Rules Our Lives

Interested in joining the Women’s Voices Campaign for Common Sense Gun Solutions? Email us at gunsolutions@womensvoicesraised.org