Every day more than 31,000 people die from firearm injuries in the United States. Every day 8 children die of gunfire. Each year about 800 American children die of firearm-related suicide. Since the Newtown, CT, massacre in December 2012, at least 17 more mass shootings (in which at least 4 people die) and 44 more school shootings have occurred.

Clearly it is time to address the growing rate of gun violence in the United States, where homicide and suicide rates far exceed those in 25 other developed countries. Well-funded gun lobbies and political opponents have obstructed progress, especially by stoking unfounded fears that citizens’ rights to own guns will be taken away.

But forum speakers pointed out that since the 1960s, U.S. motor vehicle and tobacco-related deaths have been reduced by thousands. Although both issues were controversial at the outset, reforms were passed as a result of scientific research, education, and advocacy. Thousands of lives have been saved-without banning tobacco or limiting drivers’ rights. Today, we face a similar struggle to change mind-sets and convince policymakers that gun violence is a public health threat. Speakers described local and national efforts to address gun violence as a public health issue.

Centers for Disease Control
On the national level, Dr. Mercy said, the CDC is focusing on preventive measures, none of which ban guns. 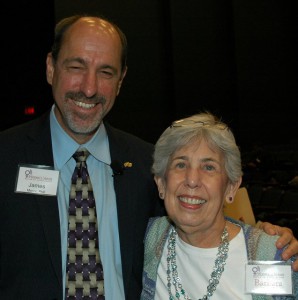 Measures include safe storage of guns, safety education, reducing magazine size of guns, forbidding gun possession by persons with a violent criminal history, and intervening in substance abuse and other factors that underlie violence.
The CDC’s vision for preventing firearm injuries calls for:

Dr. Mercy noted that gun violence, the leading cause of death among young people, adversely affects the health of those who witness it. Researchers have found that the “toxic stress” in violent communities increases the incidence of post-traumatic stress disorder, anxiety, low self-esteem, bullying, antisocial behavior, and aggression, he said. It also harms brain development and leads to premature aging and many health problems.

From Research to Reality 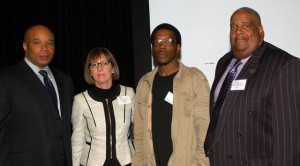 On the local level, James Clark of Better Family Life, Inc.(BFL) called for a “paradigm shift” in how violence is confronted. “We’ve got to get a lot more hands-on. We know the neighborhoods. We know the rates of teen pregnancy, STDs, infant mortality, violence, high school dropouts. How long is it going to take us to use all of our intellectual capability and resources and focus on the neighborhoods that need us the most?”

Clark said we have a growing subculture of violence. “We can’t address it with just a PSA or a panel discussion. We have to do it in the community.” In three high-crime St. Louis neighborhoods, volunteers in BFL’s Neighborhood Alliance program go door to door to assess each home and connect people with needed resources. “Porches and living rooms are the final frontier,” Clark insisted.

Another BFL program, Put Down the Pistol Campaign, directs people to resources and works with young people to teach appropriate behavior and conflict resolution. “Disrespecting you on Facebook shouldn’t make you want to kill someone,” Clark said.

Frankie Edwards, a 24-year-old college student and former gang member, said his neighborhood work with BFL has convinced him that more money is needed for programs to reach the generation coming up behind him. Like many young people in his neighborhood, Edwards fell into the violent subculture, selling marijuana, dropping out of school and serving time for gun possession. Now he sees 12- and 13-year-olds following the same path. They want things like video games and also don’t know how to handle anger, he said.

Focusing only on availability of guns is not the answer, he said. “There are too many guns; you can’t stop kids from getting guns.” He said youth need employment more than anything else. BFL connects young people with education and training resources, such as GED and construction prep programs.

In Jennings, Superintendent Anderson, drawing on 20 years of experience in public education and school safety, has launched an array of “wrap-around services” to meet the multiple needs of children and families in the low-income school district. “Everybody has to send their children to school, so it makes sense to provide services through the schools. The cycle of crime and poverty can be broken if we use schools as the center of the community,” she said. The district’s success is due to several innovations:

Schools would be the ideal place to do mental health screening, since one in four children has some type of mental health issue, said Dr. Khojasteh. But funding for screening is not adequate, even though low-cost screening tests are available. He said the state legislature needs education on the need for screening such as is already done for vision, hearing, and other health problems.

Schools also need to step up efforts to address bullying, a type of trauma that underlies violence, Dr. Khojasteh said. “Twenty-five percent of kids are being bullied in school, but schools are not responding.”

Some Signs of Hope

Although progress is far too slow, speakers agreed that in time strategies to treat gun violence as a public health problem will pay off. Polls show that the majority of gun owners favor sensible gun regulations. Other countries such as Australia and Great Britain have passed effective gun laws. Evidence confirms that community-based efforts in St. Louis are lowering crime and improving lives. As James Clark noted, community resources are available and with coordination can produce results. He left us with inspiring words: “One person can change a family. One family can change a block. One block can change a neighborhood. One neighborhood can change a city. One city can change a state. One state can change America.”

Dr. Jaffe provided many statistics in this article.

We thank the many people who helped make the forum possible: