In three rulings, federal judges in New York, California and Washington State issued injunctions temporarily blocking the “public charge” rule, which would impose serious impediments to legal residency for those who use benefits such as Medicaid or those deemed likely to use them in the future….“The rule is simply a new agency policy of exclusion in search of a justification,” Judge George B. Daniels of the Federal District Court in Manhattan wrote in his ruling. “It is repugnant to the American Dream of the opportunity for prosperity and success through hard work and upward mobility.”

President Trump faced yet another legal setback in Texas, where a senior federal judge in El Paso ruled on Friday that he had acted unlawfully in announcing he would tap $3.6 billion in Pentagon money intended for military construction to build a barrier along the nation’s southwestern border.

The Trump administration has announced that it will deny permanent residency status (i.e. “green cards”) to immigrants who are in the country legally, but have used any form of government assistance, including Food Stamps, Medicaid, or Temporary Assistance for Needy Families (TANF). And, even if an immigrant has not used any type of public assistance, the immigrant will be denied permanent residency status if government agents deem he/she/they are likely to seek public assistance sometime in the future.

Currently, individuals who arrive with a valid temporary visa, or with a work permit, may apply for permanent residency status, even if they need some government assistance.  Or, in some cases, legal immigrants already in the US may run into hard times and need to temporarily seek government assistance until their situation improves. Under this new policy, should any legal immigrants need such assistance, their applications for  permanent residency status will be denied, and they risk losing their legal status.

This would be true even in cases where parents may need government assistance for their children who are U.S. citizens. Particularly onerous is that an agent can simply decide, based on nothing more than but his/her own opinion, that an individual with no record of ever having used government assistance, might someday in the distant future need such assistance. This would be enough to deny that person their request for a green card.

ACTION: Call your Senators and Representatives and demand that they do whatever it takes to stop the Trump administration from  discriminating against legal immigrants who need social services and government help. Tell them that children who are American citizens could be hurt.

The Trump Administration has announced plans to allow immigrants to be detained indefinitely, ending a procedure known as the Flores Settlement Agreement that requires children to be held no longer than 20 days.

ACTION:  Call your Senators and Representative and demand that they do whatever it takes to stop the Trump administration from trying to undermine the Flores Settlement. Tell them the administration’s treatment of migrants and their children has been unconscionable.

Reflections on the Trip to Fort Sill

Early on July 31 almost 100 people gathered at the Jewish Community Center Association parking lot for a bus trip to Fort Sill. But it wasn’t just a bus trip. It was a mission. Heartland for Human Justice brought together an assortment of committed individuals of varied races, ages, genders, and religious affiliations. Women’s Voices was one of the original four founding members of Heartland for Human Justice, and was well represented on the trip.

Our mission was to express our outrage at the inhumane treatment of families seeking asylum in the United States. We wanted to use our bodies and voices to protest the separation of families, and the trauma for children and families caused by this separation and lack of basic food and shelter.

Fort Sill was the destination since it had been identified as a next detention site. As we stood at the visitor center there, the weight of its history lay on us. Fort Sill was an outpost in the wars against Native Americans to push them off their lands. Geronimo was imprisoned and died there. During World War II it was an internment camp for Japanese Americans unconstitutionally imprisoned solely because of their ancestry and without any charges filed against them.

Just before we began the trip, the plans to open Fort Sill as a detention center were put on hold. But we decided we needed to push forward. A detention center is wrong at Fort Sill, and it is wrong anywhere. Asylum seekers must be treated humanely, families must be kept intact, and a timely process to review requests must happen now.

Over 40 hours together old friendships re-kindled and new friendships ignited. We practiced chants for the protest, learned new songs, sang old favorites, watched educational and fun films, traipsed on and off the bus to stand in interminable bathroom lines, ate Subway sandwiches and an amazing assortment of snacks, read, shared our lives, and laughed a lot.

The heart of the trip was the time in Lawton, OK, for the protest at Rev. Jack’s Methodist Church and at the Visitor Center at the Fort. It was touching that members of the Lawton church came and joined us in our action. We lamented the history of Fort Sill and honored the memory of the adults and children who died while in detention as we read their names, ages, and where they died. We listened to the voices of youth as they described what it was like to be apart from their family; what it was like to be cold, hungry, and confused. We prayed for forgiveness for the suffering of these men, women, and children. We prayed for the courage to make our country a land of hospitality. Many of us wept.

We boarded the bus filled with “holy chutzpah.” We are a community that cares enough to not allow the atrocities and injustice that are happening on our borders to continue to happen on our watch. We know that it is our diversity that makes us great. Together we will make a difference. This trip was a first step. This was not just a bus trip.

Vigil to Protest Detention of Families and Children 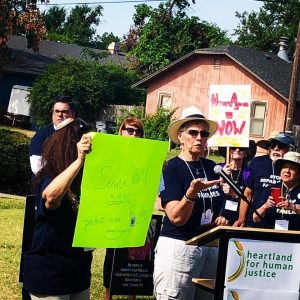 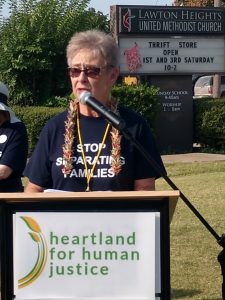 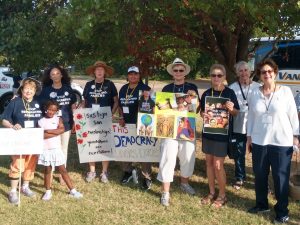 Women’s Voices Raised For Social Justice and our newly formed partner coalition Heartland for Human Justice headed to Lawton, Oklahoma to protest the separation of children and their families in immigration detention centers and to participate in an interfaith vigil in remembrance of the children who have died while in detention. See videos of the vigil here.

Heartland for Human Justice believes a nation’s immigration policy is an expression of its humanity. The current situation with immigrants entering our country lacks common decency. Separating children from their parents and failing to provide decent shelter, food and medical care is inhumane.

Heartland for Human Justice calls for the following:

Women’s Voices member Marilyn Sue Warren, speaking at a vigil in Lawton, OK, site of Fort Sill where a detention center to hold 1,400 children may be opened, urged people to contact MO Senators Blunt and Hawley to support Senate Bill 2256, which will protect children when parents are detained by immigration authorities. Roy Blunt 202-224-5721, Josh Hawley 202-224-6154. The bill has been sent to the Senate Judiciary Committee.

The Coming Round-Up of Immigrants

(Excerpts from letter by Sarah John, of Interfaith Committee on Latin America IFCLA)

Even though President Trump just announced that he is not proceeding with the round-up this week, we can expect that ICE will proceed in the coming weeks with mass round-ups. So the letter below from Sarah John of IFCLA still is important to read.

Action to Take this week: “Please call your elected officials at all levels of government to denounce the targeting of immigrants and their families. Please call your members of Congress (210-702-3059) and demand they cut all funding from the Deportation Force.”

“I know that many of you are worried, scared, angry, confused, and eager to take action in light of all of the news and information circulating regarding threats of increased immigration enforcement…

“It is important that we actively work together against the fear and hatred that are already traumatizing our communities. We must be prepared to respond to the needs of the targeted and impacted communities. We must not contribute to fear, panic, chaos, or trauma. We must remember that immigrants and their families are the ones who should make decisions for their own lives. Whatever those decisions may be, as allies, accomplices and people of faith and good will, we are called to honor their integrity and liberty in ways that are supportive, respectful, and selfless….

“In the St. Louis region during the last several decades, immigration enforcement has not stopped, waned, or ceased to impact immigrants and their families, loved ones, colleagues and friends on a daily basis. Raids are not new. Targeting immigrant families is not new. Threatening massive deportations is not new. ICE (Immigration and Customs Enforcement) is present in St. Louis, in Missouri and in Illinois. Local police regularly collaborate with and facilitate immigration enforcement in our region every single day.

In addition to the two lead cases before Furman at the U.S. District Court for the Southern District of New York, the administration is fighting five more lawsuits across the country filed by dozens of states, cities and other groups that want the question removed. A second trial over the question began earlier this month in California, and another is scheduled to begin in Maryland on Jan. 22.

Research by the Census Bureau suggests asking about citizenship status in the current political climate will scare households with non-citizens from participating in the head count. That, in turn, could jeopardize the constitutionally mandated head count of every person living in the U.S.

Women’s Voices has submitted the following statement to the Department of Homeland Security regarding the proposed “public charge” regulation for immigrants.

Women’s Voices Raised for Social Justice is appalled at the proposed change to the “public charge” policy. We believe that one of the strengths of our nation is a recognition that we are a stronger and better nation because of our diversity. The United States has a unique position in being able to welcome immigrants and provide opportunities for them and their children. The United States is also in a unique position to benefit socially and economically from the contributions of these immigrants. The proposed change to “public charge” policy stands in stark opposition to these realities.

By punishing families for accessing healthy food, health care, and housing, the regulation would make the United States sicker, hungrier, and poorer. Experiencing stress and instability – such as economic security, not having enough to eat, and lacking access to needed health care – harms parents, children, and individuals with disabilities.

Equating wealth with worth is wrong. This proposed change will jeopardize the health and well-being of those in our country who are on the path to citizenship or are seeking legal residence. This is inconsistent with our values.

The 1997 Flores Agreement limits the amount of time immigrant children can be held in detention centers to 20 days and requires that they be released to their parents, other adult relatives or licensed programs, without unnecessary delay. The administration is seeking to make changes to the current agreement to enforce their “zero-tolerance” immigration policy, arguing for the indefinite detainment of children. This will result in children being held in detention facilities for as long as the administration deems necessary.

Women’s Voices voiced opposition to the new proposal writing:Women’s Voices Raised for Social Justice, an organization based in St. Louis, Missouri, opposes the proposed rule “Apprehension, Processing, Care and Custody of Alien Minors and Unaccompanied Alien Children.” Indefinite detention of families is abusive and detrimental to a child’s physical and mental health. This regulation will allow the current administration to operate facilities with no oversight, will be costly to taxpayers and damage our reputation with our international allies. Please, preserve the Flores protections for immigrant children.

“Is The Lamp Still Lit?” International Institute of St. Louis