To read about our work on Immigration, Refugees and Citizenship click here

To read about our work on LGBTQIA Rights click here

The House approved with bipartisan support a reauthorization of the Violence Against Women Act, a popular 1994 law that protects and provides resources for victims of domestic abuse and sexual violence. The measure passed 244-172.  The bill includes new provisions which will face hurdles in the Senate.

“The House approved with bipartisan support a reauthorization of the Violence Against Women Act, a popular 1994 law that protects and provides resources for victims of domestic abuse and sexual violence. The measure passed 244-172.

“The most contentious issue in the House-passed bill is a provision that expands the criminal threshold to bar an individual from buying a gun to include misdemeanor convictions of domestic abuse or stalking. It would also close the so-called boyfriend loophole to expand the definition of who is affected by existing gun prohibitions to include dating partners.”

“The House-passed bill would also strengthen existing protections for transgender women to access women’s shelters and serve in prisons that match their gender identity.”

The Post Dispatch reports: “The Missouri attorney general’s office has dropped its lawsuit against the St. Louis Housing Authority and a housing management company after a year of clean-up at the Clinton-Peabody Housing Complex south of downtown St. Louis.

The US House of Representatives has reauthorized the Violence Against Women Act. The House of Representatives approved legislation renewing the Violence Against Women Act with new provisions that restrict gun ownership and expand transgender rights.  The Senate has not yet advanced its own VAWA reauthorization, which Sens. Joni Ernst, R-Iowa, and Dianne Feinstein, D-Calif., are working on. It is unclear if the gun provisions in the House bill can clear the Senate, but Democrats say they will demand their inclusion. Read more here.

The Human Rights Campaign responded to news that the U.S. House passed a reauthorization of the Violence Against Women Act (VAWA) by calling upon the Senate to do the same.

“It is essential that Congress reauthorize the Violence Against Women Act this year. Since first enacted in 1994, VAWA has made a significant impact in providing support and safety to all victims of sexual and domestic violence,” said David Stacy, HRC Government Affairs Director. “Despite the progress we’ve made, sexual and domestic violence remain an ongoing problem that requires continued action. That’s why it is shameful and bizarre for House Republican leadership to paint transgender women as dangerous in order to try to defeat this important legislation. The House rejected this false and defamatory fear-mongering and the Senate should follow suit.”

The Violence Against Women Act was passed by Congress and signed into law by President Clinton in 1994 and received reauthorization from strong bipartisan majorities in 2000, 2005 and 2013. Despite opposition by House Republicans in 2012 due to its protections for LGBTQ people, Native women, and undocumented immigrants, it was ultimately reauthorized in 2013.

Last month, HRC applauded pro-equality members of the House Judiciary Committee for voting down last-minute, harmful, and unnecessary amendments to VAWA that would have undermined existing critical protections for transgender people facing violence, and would have allowed federally funded organizations to refuse to provide services to some individuals –including members of the LGBTQ community — because of personal beliefs.

Five members of Women’s Voices joined dozens of others who crammed into the crowded board room when members of the Board of Commissioners of the St. Louis Housing Authority met on March 22. The topic of discussion: an intractable infestation of mice, which has plagued the residents of the Clinton-Peabody housing complex for more than a year. 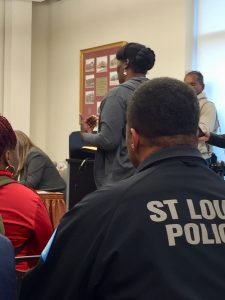 Residents took to the microphone to describe intolerable living conditions. Mice, bedbugs and roaches force residents to keep their lights on all the time; foul odors force them to open their windows even in the winter. “Our living conditions are embarrassing and dangerous and traumatizing. I hate living at Clinton-Peabody,” one woman said, as she burst into tears. Another resident challenged board members to “spend one night in an apartment at the complex.” 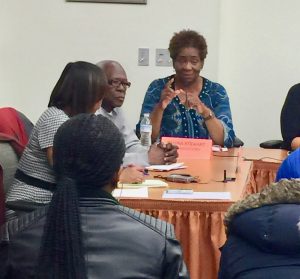 While most board members listened impassively to the residents concerns, one commissioner, Regina Stewart, was moved by their heartfelt pleas for help. “I will not spend the night in a mice-infested apartment, but I do promise you that we will come up with a plan to help you,” she said, to a standing ovation. “I hear your pain, and we must do something

Gov. Eric Greitens approved a measure that will require people to explicitly prove their race, sex or other protected status actually motivated their boss or colleague to mistreat them to win an employment discrimination case….Under the new law, which goes into effect Aug. 28, such an employee would need to meet a higher standard: The worker would have to show that race explicitly “motivated” mistreatment through, for example, written documentation of racist comments. Read more here

Missouri would be the first state to roll back civil rights protections – rights in employment and housing that were won through decades of struggle.

On Monday, more than 100 headstones were overturned at Chesed Shel Emeth Cemetery in St Louis. Last month, a mosque in Victoria, Texas, was burned and an Islamic Center in Davis, California, was vandalized. “These crimes against cemeteries and houses of worship cannot be tolerated and we expect them to be investigated and prosecuted,” said Council Co-Chair Stanley M. Bergman.

Standing with the LGBT Community: Hate Has No Place

Women’s Voices Raised for Social Justice joins with many other organizations and individuals in the St. Louis community and across the country in condemning the brutal act of violence that took 49 lives and injured 53 others in Orlando FL on June 12. This massacre, motivated by hate and bigotry, can not and must not go unanswered.

We will continue our commitment to common sense gun regulation, including a ban on military style assault weapons. We will continue to speak out against discrimination against people based on sexual orientation, race, religion or gender. We will come together in solidarity with the majority of Americans who believe in the founding principles of our country, that everyone has the right to live in a free and democratic society where the rights and liberties of all are valued and protected.

In Missouri You Can Be Fired For Being Gay

Tuesday, October 27, 2015 the Missouri Court of Appeals Western District denied James Pittman’s claim against his employer for creating a hostile work environment – and eventually firing him – because he is a gay man. In his opinion Judge James Welch writes:

Women’s Voices calls on the Missouri Legislature to pass the Missouri Nondiscrimination Act (MONA) which would prohibit discrimination based on sexual orientation and gender identity in the workplace. MONA would simply extend the existing Missouri Human Rights Statute to include lesbian, gay, bisexual, transgender (LGBT), and allied people. 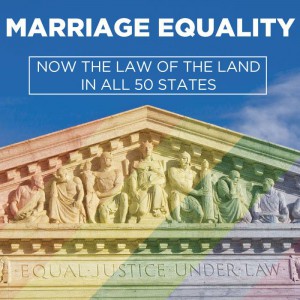 The majority bases its conclusion that same-sex marriage is a fundamental right on “four principles and traditions”: (1) right to person choice in marriage is “inherent in the concept of individual autonomy”; (2) “two-person union unlike any other in its importance to the committed individuals”; (3) marriage safeguards children and families; (4) marriage is a keystone to our social order.

Justice Kennedy wrote: No union is more profound than marriage, for it embodies the highest ideals of love, fidelity, devotion, sacrifice, and family. In forming a marital union, two people become something greater than once they were. As some of the petitioners in these cases demonstrate, marriage embodies a love that may endure even past death. It would misunderstand these men and women to say they disrespect the idea of marriage. Their plea is that they do respect it, respect it so deeply that they seek to find its fulfillment for themselves. Their hope is not to be condemned to live in loneliness, excluded from one of civilization’s oldest institutions. They ask for equal dignity in the eyes of the law. The Constitution grants them that right.

“Shelter Beyond Shelter: A Holistic Approach to Homelessness”

“CASA – A Powerful Voices for Children in Foster Care