Women’s Voices was formally organized in May, 2005, when 25 St. Louis-area women gathered at the University City Library to discuss their concerns about social justice issues. Within six months more than 150 women had added their names to the mailing list. Progressive women of all ages and backgrounds are welcome to join the organization.

In July, 2005, the first general meeting was held. In November, 2005, the group moved to the Alberici Group headquarters, one of the most environmentally friendly buildings in the world. Alberici hosted our meetings until we grew too large for that space. We now meet at the The Heights, 8001 Dale Road, Richmond Heights. 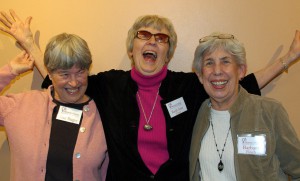 Barbara Finch is a former hospital vice president and public relations practitioner who owned and operated a communications consulting firm for 11 years. She is a former member of the Institutional Review Board at Washington University School of Medicine and the Jewish Community Relations Council in St. Louis. She also taught creative writing in the St. Louis city schools through the Springboard to Learning program.

Joanne Kelly is a retired St. Louis County educator with experience in elementary and middle school teaching, counseling and administration. Children are her passion, with social justice for all people is an ancillary part of that passion.

Ann Ruger has worked with several St. Louis-based child advocacy organizations as project director, grant writer and editor. During a recent stint in Carbondale, Illinois, she worked as a contributing writer for the Southern Illinois University magazine and led a successful effort by her Unitarian congregation to build a new church.

Ruth Ann Cioci is retired from Laura McCarthy Realtors, where she was manager of the Kirkwood office, vice president, and was responsible for writing and designing most of the firm’s promotional materials. Ruth Ann and her husband Pat moved to Minneapolis in the Spring 2014. At the February 2014 Women’s Voices meeting, President Mary Clemons presented Cioci with a resolution commending her for her “dedication, commitment and service.”