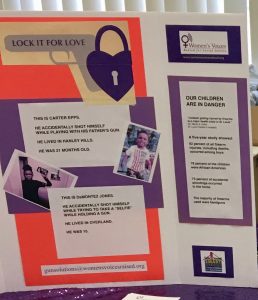 Carol Wofsey, co-chair of the Common-Sense Gun Solutions Committee, was a speaker for the panel discussion.    Andrea Bauman was at our display table and distributed free gun locks to people who have unlocked guns in their homes. 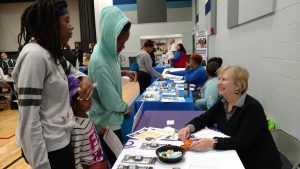 2 Community Fairs – 115 Gun Locks Given Away

October 18 Andrea Bauman, Barbara Harris, Dayle Kline and Joan Park attended the Affina Healthcare Cancer Awareness Fair on North Florissant Rd.    At the event 45 locks were distributed.   On Saturday, November 12 Nelda Carlisle-Gray, Gail Doell, Barbara Harris and Harriet Kopolow attended the 4th Annual ACA Enrollment & Home Health & Energy Fair in St. Ann.  Thanks to their good work 70 gun locks were given to people who have unsecured guns in their home.     Women’s Voices agrees with a woman who came up to Joan Park after the fair in October who said, “You will never know how many lives you have saved today.” October 8 and October 9, 2016

2 Community Fairs – 75 Gun Locks Given Away 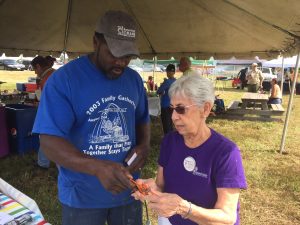 Barbara Finch demonstrates how to use the cable lock

On a beautiful fall weekend members of the Campaign for Common-Sense Gun Solutions committee volunteered at the Overland Care Fair and the Chain of Rocks Community Association Oktoberfest. Visitors to our Lock It For Love display table were able to leave with free gun locks after having a brief discussion about the importance of securing their firearms and a demonstration on how to use the cable locks.

Thanks to Mary Clemons, Barbara Finch, Judy Ford, Dayle Kline, Fran Milsk and Carol Wofsey for volunteering their time at these events.

On August 28 Andrea Bauman and Mary Clemons (along with husband Dale and dog Henry) were in Forest Park for the Peace Fest sponsored by Better Family Life.   On September 10, Barbara Finch and Joan Park participated at an event at the  St. Louis Crisis Nursery headquarters on North Grand Blvd.  At both events gun locks were given to people who have unsecured guns in their homes.   But we are always pleased to hear from people who do not own a firearm.  One fair participant at the Peace Fest said, “I don’t own a gun because I have anger issues.”  Quite a few women at the Crisis Nursery said they don’t own guns because they know children are safer in a home without one. 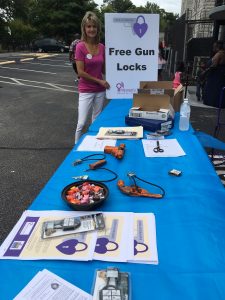 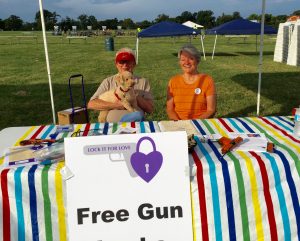 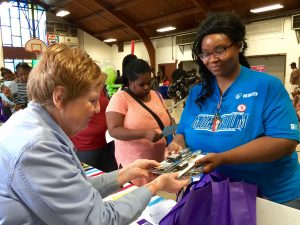 Barbara Harris speaks with a fairgoer at the Ferguson Community Center.

A Gun Lock Give Away Double Header!

In the morning Mary Clemons, Barbara Davis, Harriet Kopolow and Carol Wofsey participated in the “Mothers Against Killing” march and fair at O’Fallon park.   In the evening, Barbara Finch and Carol Wofsey attended the Better Family Life “Gun Violence Summit” at the New Northside Family Center.    At both events we talked with people about gun safety.  A total of 40 gun locks were given to people who stopped by our display tables and indicated that they have unsecured guns in their homes. 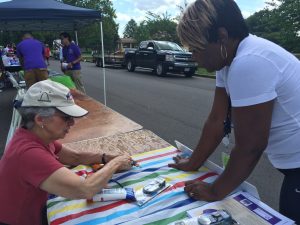 Harriet Kopolow demonstrates how to install a gun lock at the Mothers Against Killing fair. 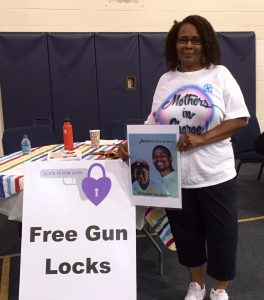 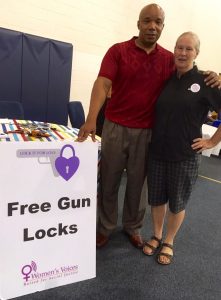 Valerie Dent holds a photo of her sons, both of whom were murdered by guns, at the Better Family Life event. The killer of her sons has never been found and Dent works tirelessly to curb the epidemic of gun violence.

Back To School Store

Women’s Voices participated once again at the highly successful Back 2 School Store event sponsored by the National Council of Jewish Women, St. Louis.  A record 188 gun locks were given to adults who have unsecured firearms in their home.   Thank you to Andrea Bauman, Lise Bernstein, Mary Clemons, Gail Doell, Norma Line, Brigid McCauley, Fran Milsk, Joan Park and Carol Wofsey for talking with children and adults who stopped at our display table. 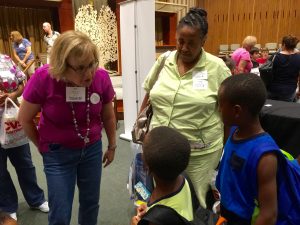 Lise Bernstein talks to two young boys about what they would do if they found a gun in the playground.  They correctly answered that they wouldn’t touch it and would get an adult. 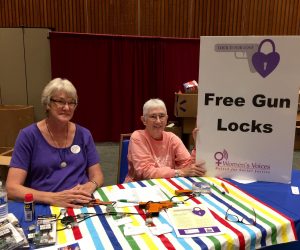 Norma Line and Brigid McCauley are ready to talk to people who come to the table.

Carol Wofsey and Barbara Finch were joined by Barbara’s daughter Sarah Coleman and grandson Sam Finch at a neighborhood fair held in Walnut Park.  Gun safety information was distributed and 15 gun locks given away.

Carol Wofsey, Linda Wallace-Jones, Andrea Bauman and Mary Clemons participated in the St. Louis City P.I.E.R. event at Gregory J. Carter Park.   The neighborhood fair was well attended and Women’s Voices distributed 40 locks to people who have guns in their homes that are unsecured.   The photo below includes Carol Wofsey, co-chair of the Campaign for Common-Sense Gun Solutions, Andrea Bauman and Mary Clemons.  A videographer was taking pictures of our literature and our disarmed demonstration guns. 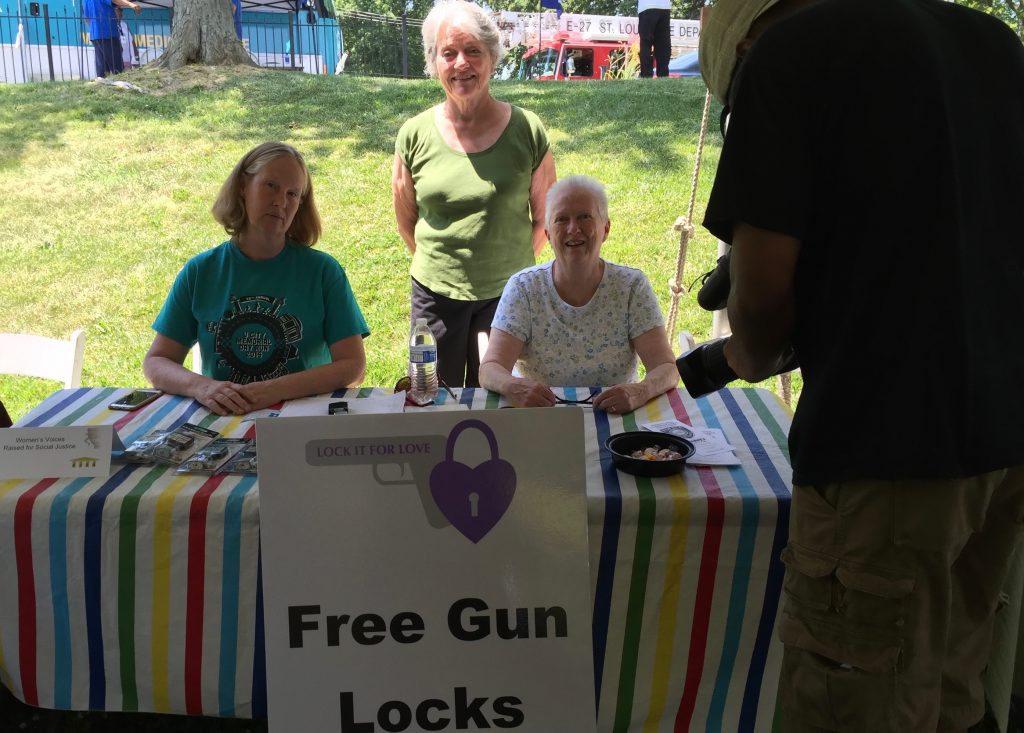 Members of Women’s Voices were welcomed to the St. Louis Story Stitchers space on June 2 as both organizations observed June 2 as Gun Violence Prevention Day.  Teen and young adult members of the Story Stitchers document the communities they live in through art and music with special attention to bullying, implicit bias and gun violence.  Members of the Campaign for Common-Sense Gun Solutions who participated included Mary Schuman, Sue Flanagan, Andrea Bauman and Barbara Finch. 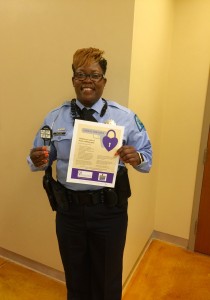 istributed gun safety information and 41 free gun locks at the health fair.   Special thanks to Officer Regina Moore who made an announcement following a short program with Mayor Slay and an officer with the St. Louis Fire Department.  Officer Moore urged participants at the fair to come by our display table to get a gun lock if they had a gun in their home. 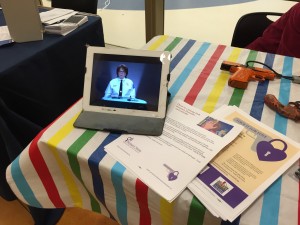 Our video featuring Captain Janice Bockstruck was played at the table demonstrating how to secure guns with the cable locks.    In the video Captain Bockstruck says that our children are “irreplaceable and invaluable” and that “securing a firearm can prevent an accidental death or suicide.”   We were reminded of that when a mother and young boy stopped by the table and told us that his friend had been shot.  The friend was 8th grader Jamyha Luss who died January 17th when at a friend’s house and boys playing with a gun shot her in the back.

Thanks to Carol Wofsey, Dayle Kline, Harriet Kopolow, Lise Bernstein and Mary Clemons for their work at the O’Fallon health fair. 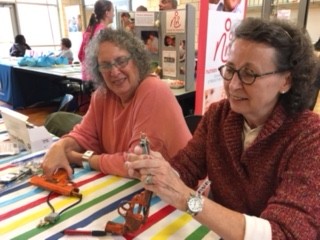 Dayle Kline and Judy Ford practice locking up a pistol and a revolver before the YMCA family event at O’Fallon Park Recreation Center. Women’s Voices will continue to give away gun locks in the Lock It For Love program throughout the summer.&nbsp

“Don’t Be Foolish: Lock Your Guns!” was the theme on April 1 when members of the Women’s Voices Campaign for Common-Sense Gun Solutions gave away free gun locks in the rotunda of St. Louis City Hall.  Those who lined up to learn about gun safety, view a video demonstrating the proper way to lock guns, and get a free lock promised that they would not be foolish.  Two hundred gun locks were distributed in less than three hours.  The event was co-sponsored by the Deaconess Foundation and the office of St. Louis Mayor Francis Slay.  Women’s Voices members who participated were Lise Bernstein, Ruth Ehresman, Fran Milsk, Mary Clemons, Joan Park, Harriet Kopolow and Barbara Finch. 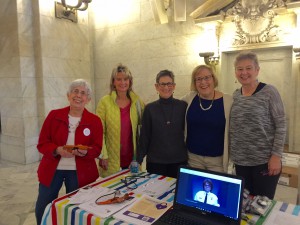 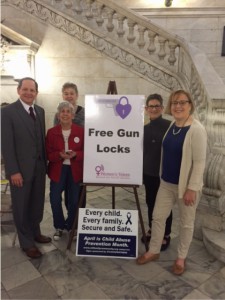 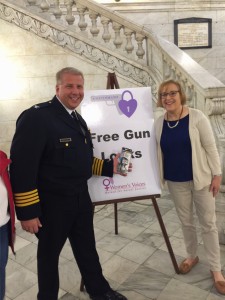 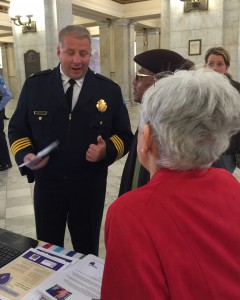 Chief Dotson explaining to a man who came by the display the importance of using a gun lock. Barb Finch looks on.