During 2017 we attended concerts, health fairs, back to school and church events.   More than 1,600 locks were distributed in the St. Louis area.     Our partners in the Episcopal Diocese distributed nearly 200 lock in the Cape Girardeau area.   Thanks to all our volunteers.   Below are some of the events we attended.

285 Gun Locks Given Away in August! 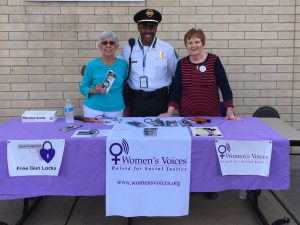 Members of the Women’s Voices “Lock It for Love” Committee attended 8 events in the month of August.  Back-to-school events provided opportunities to give parents and care givers gun safety information and free gun locks.    We went from South Broadway, to the North County Recreation Center and Normandy High School.  We attended parent meetings at Dewey and Hickey Elementary schools.   And in addition to back-to-school events we participated in a health resource fair at Gregory J. Carter Park, enjoyed the Dirty Muggs Band at an Ivory Perry Park concert and went to the Herbert Hoover Boys and Girls Club for a Police Athletic League program.   The result of these activities?   285 gun locks are in homes to protect our children from accidental injuries and deaths.   Thanks to our volunteers:  Andrea Bauman, Lise Bernstein, Jeanie Bryant, Ruth Ehresman, Barbara Finch, Susan Flanagan, Cathy Gilbert, Barbara Harris, John and Judi Jennetten, Joanne Kelly, Amy Moglen, Brenda Phillips, Mary Schuman, Helena Webb and Carol Wofsey.

More Than 350 Gun Locks Given Away in July! 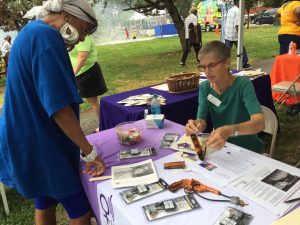 July has been a busy month for the Women’s “Voices Lock It for Love” program.  Our members attended community events and made  presentations to  interested groups. We heard good music while working at outdoor concerts, talked with children and adults about gun safety, listened to people who talked about their concerns for the safety of their children and distributed gun locks.    We were in the city and county, the north side and south side.   Where people want us, we go!

We attended the Pick Up the City Tour on North Garrison, The People’s Health Center Community Fair on Delmar, the Peabody Clinton Community Jobs Fair, Community Night Concert at St. Louis Place Park, The National Urban League at the American’s Center, and the Back to School Fair at Temple Israel sponsored by the National Council of Jewish Women – St. Louis, and more.    We spoke at the St. Louis Safety Group meeting at the O’Fallon Park Recreation Center, St. Barnabas Episcopal Church in Florissant and at the Hyde Park Community Center.    Thanks to everyone who helped at the events  We distributed 366 gun locks. 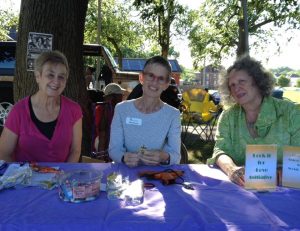 Ruth Ehresman, Mary Shuman and Dayle Kline enjoyed a beautiful evening and a concert featuring vocalist Denise Thimes.   While at our display table they gave away 84 gun locks to people who have unsecured firearms in their homes.  The event was sponsored by Union Communion Ministries (UCM). 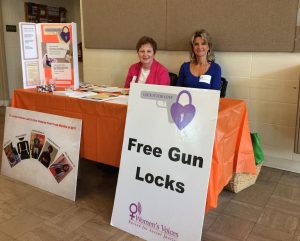 Grace Episcopal Church in Kirkwood had a fair and invited Women’s Voices to come with a display of our gun locks.   The Rev. Marc Smith, the Bishop’s Deputy for Gun Violence Prevention, attended and spoke to the crowd about the Episcopal Church collaboration with us on the gun lock initiative. Pictured are Barbara Harris and Joan Park, members of the Women’s Voices Campaign for Common-Sense Gun Solutions Committee. 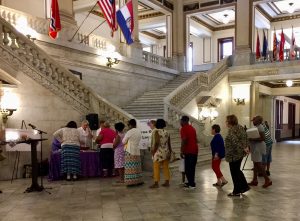 The rotunda of St. Louis City Hall was busy from 10:00 a.m. to 2:00 pm as people streamed in to get free gun locks.   Women’s Voices sponsored the event in partnership with The City of St. Louis, The Department of Health of the City of St. Louis, and SSM Health Cardinal Glennon Children’s Hospital.  It was held in conjunction with national ASK day, an initiative begun by the Brady Campaign to encourage parents to ask if there are guns in the homes their children visit.
City employees received emails informing them that free gun locks would be available, and the public was also invited.  Publicity in the St. Louis Post-Dispatch, on the radio and television news shows, resulted in Women’s Voices giving a record number of gun locks: 537!! 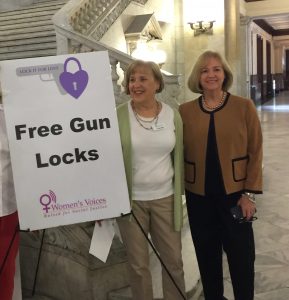 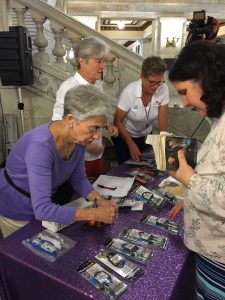 It was fitting that on Gun Violence Prevention day Women’s Voices participated in two community events in St. Louis and gave away 40 gun locks.  One event was sponsored by the City of St. Louis Health Department at Marquette Park and the other was sponsored by two churches at Mallinkrodt School in South St. Louis.    In addition to opportunities to learn about gun safety, the St. Louis Fire and Police Departments were there. Polar Pops provided welcome relief from the sun by giving free popsicles!    Fox 2 News reported on the event and our member Barbara Harris was interviewed.  See the news report here. 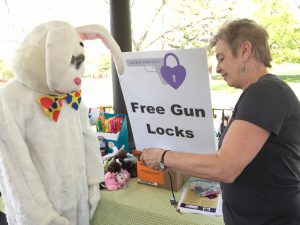 At the Gravois Park event children hunted for Easter eggs, had their pictures taken with the Easter Bunny, decorated hats and received attendance prizes.   Women’s Voices had a display table with gun locks and talked with children and met with adults who were eager to receive locks for guns in their homes.     Because of the large number of children in the pavilion area we had quite a few conversations with youngsters who were interested in the disabled guns and who wanted to pick them up.  One young man questioned our “no touching” policy and asked if his mother said “yes”, could he pick it up?  Again we said, “No,” so he found his mother and brought her to the display.  She appreciated our policy, and was glad to have us discuss it with her son again while she was present to confirm for him that children should not touch or play with guns.   And, she took a  lock and agreed that it was especially important that she use it because of his extreme interest in holding the gun.

After the Easter Egg Hunt event, SouthSide Forever sponsored an event at Gravois Park with music, lunch and  free haircuts.  We gave our free gun locks!     The day resulted in more than 40 locks being given to the event participants.

Thanks to Ruth Ehresman (seen in the photo showing a gun lock to the Easter bunny), Mary Clemons and Dayle Kline for being at  Gravois Park. 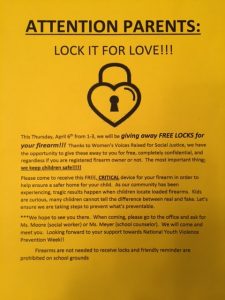 The Ashland Elementary School in St. Louis invited Women’s Voices to distribute free gun locks to interested parents.  Andrea Bauman and Susan Flanagan worked with a school counselor and social worker at the school.  The parents were sent a notification that they could stop by and get a gun lock.    After the event, Andrea and Susan received a nice thank you note. 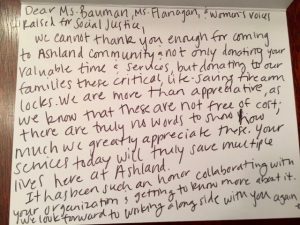 Several members of the Women’s Voices Campaign for Common-Sense Gun Gun Solutions attended the Pediatric Firearm Injury and Safety Symposium sponsored by the Washington University School of Public Health on March 7. The event highlighted the economic, social and emotional costs of pediatric firearm-related injuries and deaths.
Dr. Martin Keller and Dr. Bo Kennedy, both emergency room physicians at St. Louis Children’s Hospital, reported that between 2002 and 2015, the hospital cared for 916 children who were injured or killed by firearms.  Thirty-five percent of these were younger than 15.  Cases included: 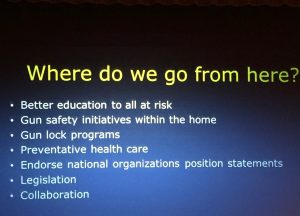 Presenters called for greater public awareness about the danger of loaded, unlocked guns in the home, as well as gun lock programs.  Women’s Voices is proud that its “Lock It For Love” program provides awareness, education, and preventive measures as well as free gun locks to families in our community. 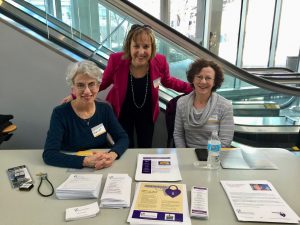 Women’s Voices had a display table at the symposium with information about our “Lock It For Love” program and gun safety.
Pictured here:   Harriet Kopolow, Lise Bernstein, Dede Berg