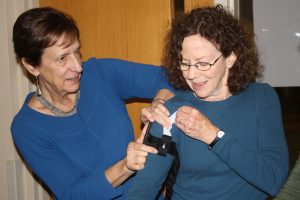 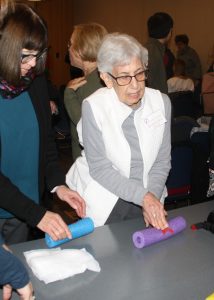 Immediately preceding the November monthly meeting, Women’s Voices offered “Stop the Bleed” training. This program empowers people to help in a bleeding emergency before professional help arrives. More than 50 people attended the one-hour session, conducted by trauma surgeon Laurie J. Punch of Washington University. With her humor and welcoming manner, Dr. Punch put the group at ease as she explained that even people with no medical backgroundcan save lives by stopping severe bleeding from an accident or gunshot wound. “Time is of the essence” to avoid shock and death from blood loss, she said. She and medical volunteers taught us how to apply pressure by hand or use a tourniquet. To arrange a training session for a group as small as five people, go to www.stopthebleedSTL.org. 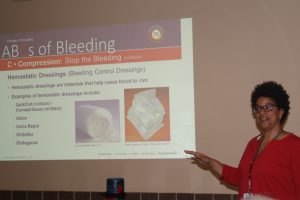 What’s with the Workhouse?

Speakers: Inez Bordeaux, a leader in the Close the Workhouse Campaign and a former inmate;  Sima Atri, attorney, ArchCity Defenders

Hundreds of mostly black men and women are held at the City of St. Louis Workhouse (officially the Medium Security Institution) in a system that unconstitutionally discriminates against the poor and African Americans, explained Sima Atri. Ninety-eight percent of Workhouse inmates have not been convicted of a crime and are awaiting trial, often for more than 200 days. The majority of them have been charged with nonviolent offenses such as parole, traffic, or minor drug violations. They are being criminalized only because they are poor, Atri said. Anyone who can afford the $25,000 bail, which a judge routinely and arbitrarily sets, is released until trial. 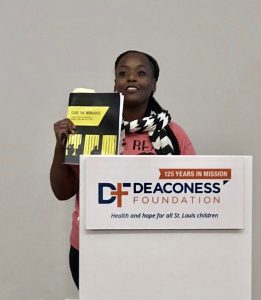 Inez Bordeaux described how her misdemeanor offense almost ruined her life, as she was separated from her children and lost her nursing license (which years later was reinstated). Unable to afford bail, she spent 30 days in the Workhouse, which she terms a “hell hole.” She described the deplorable conditions inmates endure–rats, roaches, mold, inoperative toilets, lack of medical care, etc., which have been well documented by others.

Both speakers called on attendees, wherever they live, to join protests to pressure Mayor Lyda Krewson, Circuit Attorney Kim Gardner, and the St. Louis Board of Aldermen to close the Workhouse because of its inhumane and unconstitutional conditions. The $16 million the city spends (wastes?) each year to run the Workhouse does not keep the public safe the speakers insisted. Using those dollars to address housing, substance abuse, and poverty would more effectively increase public safety.

ArchCity Defenders, Action St. Louis, the Bail Project, and MORE (Missourians Organizing for Reform and Empowerment) are partnering in the “Close the Workhouse Campaign.” The campaign’s comprehensive report “Close the Workhouse” is an eye-opening, clear explanation of many issues related to the Workhouse. It is available for sign up www.closetheworkhouse.org.

This Lunch & Learn was held at the Deaconess Center for Child Well-Being in St. Louis. It was part of “Overcoming Obstacles to Create Community,” an ongoing project of the Women’s Voices Racial Justice Committee that explores racial injustice and the roles we play in it. 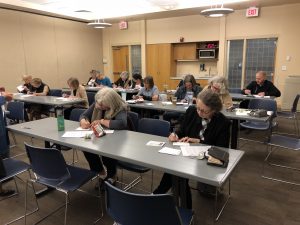 Prior to out October 11 program, members and guests met to address postcards reminding people to vote on November 6 and to let them know the Women’s Voices positions on the ballot issues.  An enthusiastic group addressed and wrote notes on 2,000 post cards.
​ 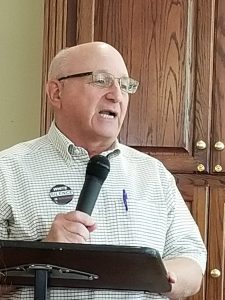 At the Racial Justice Committee’s  August 16 Lunch & Learn, Tom Schweizer encouraged white attendees to be aware of their white privilege– their unearned benefits that have afforded them education, health care, employment, housing, and many other goods just because of their skin color.  Schweizer, author of Understanding What It Means to Be White and Privileged Journal, said white people created this country’s racist system, and it is their responsibility to change it. “Be aware of what you see and pay attention to what you hear,” he said, quoting his grandfather, who first made him aware of race in the Jackie Robinson era.

He advised white people to speak out when they see racism, to stop avoiding places and people that make them uncomfortable, and educate themselves by reading books and attending meetings like the Lunch & Learn. Audience members added that we also need to work for systemic change. Several pointed to our education system, which fails to adequately address our history of racial injustice. Others mentioned laws and discriminatory real estate practices that perpetuate racism. 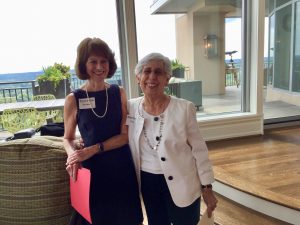 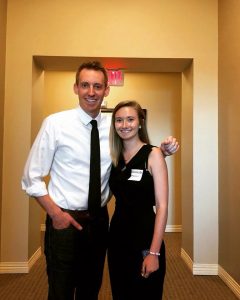 Even with a membership well under 100, Women’s Voices created an enormous splash in 2006. The Missouri Supreme Court was poised to rule on the constitutionality of Missouri’s Voter ID law, which we viewed as a “poll tax in disguise.” Women’s Voices persuaded attorney Cynthia Holmes to file a friend-of-the-court brief on behalf of Women’s Voices-a move WV-cofounder Barbara Finch applauded as an act of supreme chutzpah! Other organizations joined in the amicus brief, which eventually included 37 million AARP members.

As Women’s Voices has grown in numbers and depth, assuring voting rights continues to be a high priority. Jason Kander was a perfect fit as keynote speaker at our June 23 reception to kick off our 2018 Annual Fund Campaign. A former Missouri state legislator and secretary of state, Jason is currently the director of Let America Vote. This organization is tackling issues of voter suppression across the country and supporting efforts to register new voters.

Jason brings amazing energy and passion to this important work. At the reception, generously hosted by Ann and Mike Konzen, he kept the packed room spellbound, describing a host of states’ voter-suppression efforts, as well as hopeful initiatives to encourage citizens to cast their vote to make meaningful policy change.

The goal of our 2018 Annual Fund Campaign is $30,000. The funds are essential to maintain the administrative staff and office that allow us to function efficiently and broaden our influence. Member dues cover about one-third of WV’s budgeted expenses, but we depend on contributions and grants to help us continue our work. We appreciate your support and encourage you to help us grow by making a gift as you are able. 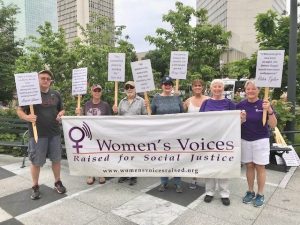 Women’s Voices participated for the 14 year in the Pride Parade. Andrea and Bob Bauman brought our banner and signs and was joined by marchers Susan Dee and her husband, Lisa Lageneckert, Joan McKerrow, Deanna Stevenson, Ellen and Mike Wentz and others. Susan Dee said the event was “a blast” and Andrea said the crowd was larger than last year and that our “group enjoyed marching to honor Pride weekend.”
​ 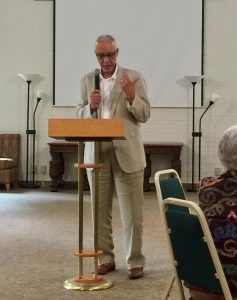 Mike Jones, well-known St. Louis American columnist, engaged the audience in an inspiring discussion at our first Lunch & Learn on June 21. Exploring a difficult reality, he gripped the audience with his humor and vast knowledge of history. “White America, he said, “is facing a moral dilemma” as it addresses the country’s systemic racial disparity in power and privilege. He challenged white “moderates” to change the social structures and political policies that divide us. The event was part of “Overcoming Obstacles to Create Community,” an ongoing project of the Racial Justice Committee that explores racial injustice and the roles we play in it. Our next Lunch & Learn, on August 16, features Tom Schwiezer, author of Understanding What It Means to Be White and Privileged Journal. 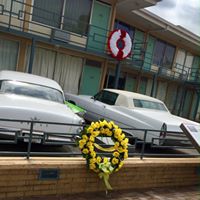 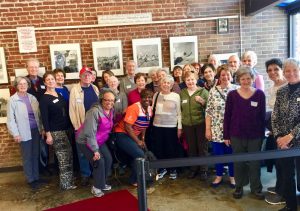 It was billed as “two full days of education, adventure and camaraderie,” and Women’s Voices first “road trip” did not disappoint!

More than two dozen members and friends enjoyed studying the civil rights movement in Memphis under the leadership of tour guide Linda Koenig. From the first discussion question on the bus (what is the difference between civil rights and human rights?) to the final piece of information dispensed on the way home (learning that the Tennessee legislature had removed $250,000 earmarked for the Memphis bicentennial celebration because the city had removed two Confederate statues), the group gained new understanding about past and present civil rights struggles in the United States

Activities included a stop at the Dr. Ernest Withers Photography Gallery on Beale Street, where iconic photos of the Emmitt Till trial, the Montgomery bus boycott, and the life of Dr. Martin Luther King Jr. were on display, to Slave Haven, a home built in the 1850s close to the Mississippi River where runaway slaves were sheltered on their journeys through the underground railroad.

Highlight of the second day was an entire morning at the National Civil Rights Museum at the Lorraine Hotel, where Dr. King was assassinated. The outstanding collection of photos, videos and artifacts was both informative and moving.

The Memphis tour was a project of Women’s Voices Racial Justice Committee, which is undertaking a year-long effort called “Overcoming Obstacles to Create Community.”

March To Save Our Lives! 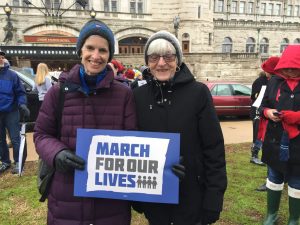 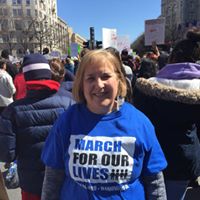 Women’s Voices members participated in March for Our Lives events. Our president Lise Bernstein was in Washington DC for the march organized by survivors of the Marjory Stoneman Douglas High School shooting February 14 which killed 17 people.

Andrea Bauman joined marchers in Nashville, Tennessee. Others of us joined the 10,000 people who marched in a light rain in St. Louis. A feature of all 800 marches across the country and internationally was that they were organized by the young people.

Starting the St. Louis march, Rev. Daryl Gray, who has led protests in Ferguson, said, “Since the Civil Rights movement, there’s never been a struggle that’s been successful without our young people being involved.” State representative Bruce Franks and state senator Claire McCaskill also spoke at the march. Gray also said. “When we see our young people on the street, when we see them in harm’s way, we have a tendency to get up and move. Today, people are getting up and they’re moving, because young people are moving us.” 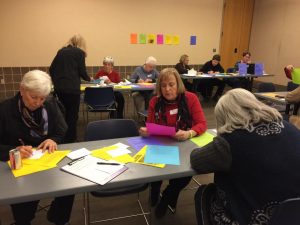 Prior to our regular monthly meeting March 8, Women’s Voices held a “party” to write our legislators to let them know our opinions about “bad” bills being considered in the Missouri legislature.

Women’s Voices’ Racial Justice Committee and Eliot Unitarian Chapel Co-sponsored a screening of Whose Streets? as part of the Women’s Voices’ “Overcoming Obstacles to Create Community” initiative. Whose Streets? is an award-winning documentary film that explores the 2014 unrest in Ferguson after the death of Michael Brown. Images captured by cell phone cameras, print and TV photojournalists and documentary filmmakers show the racial tension, grief and rage of residents as they confront police and national guard officers armed with military weapons.

“This is a powerful movie for many reasons,” said Jeanne Bubb, chair of the Women’s Voices Racial Justice Committee. “Many of us lived through these events. They happened less than 20 miles from where most of us live. We recognize many of the faces in the movie and we know some of their stories. It’s important that we hear from them, because they were fighting for more than their civil rights. They were fighting for their right to live.”