The Inner Workings of Voting 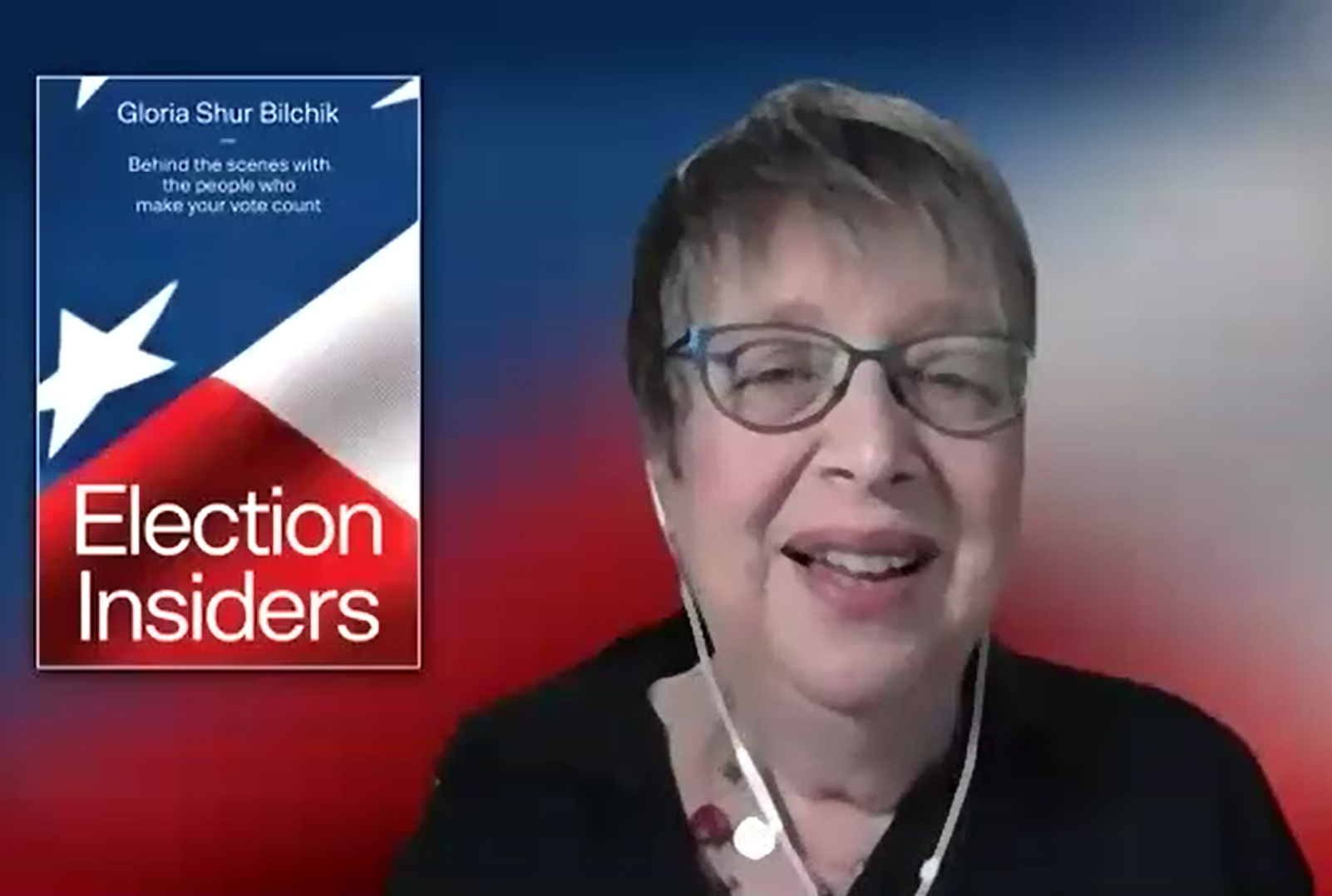 Most people know little about how our elections work. Women’s Voices member Gloria Bilchik explains it all in her new book, Election Insiders: Behind the Scenes with the People Who Make Your Vote Count. A freelance journalist, Bilchik told us that she focused on St. Louis County, with the goal of demystifying the voting process that many of us take for granted.

St. Louis County’s 750,000 registered voters make it one of the country’s largest election jurisdictions, but it serves as a microcosm for the challenges faced by election administrators everywhere, she said. Planning, recruiting poll workers, and examining ballots are just some of the many tasks election workers do in a country with more than 8,000 separate election jurisdictions with differing structures. In Missouri, each county has its own procedures. A more centralized system could standardize some procedures, she said. But decentralization is advantageous because decentralized voter databases and voting machines are less vulnerable to hacking attacks.

In answer to questions about improving Missouri’s voting system, Bilchik advised the audience to lobby Missouri legislators for more funding for voting, no-excuse absentee voting, and more early voting. Regarding concerns about election integrity, she said, “call 1-866-OUR VOTE if you see anything on Election Day that doesn’t seem right.”

Beyond Housing Calls for Bold Investment 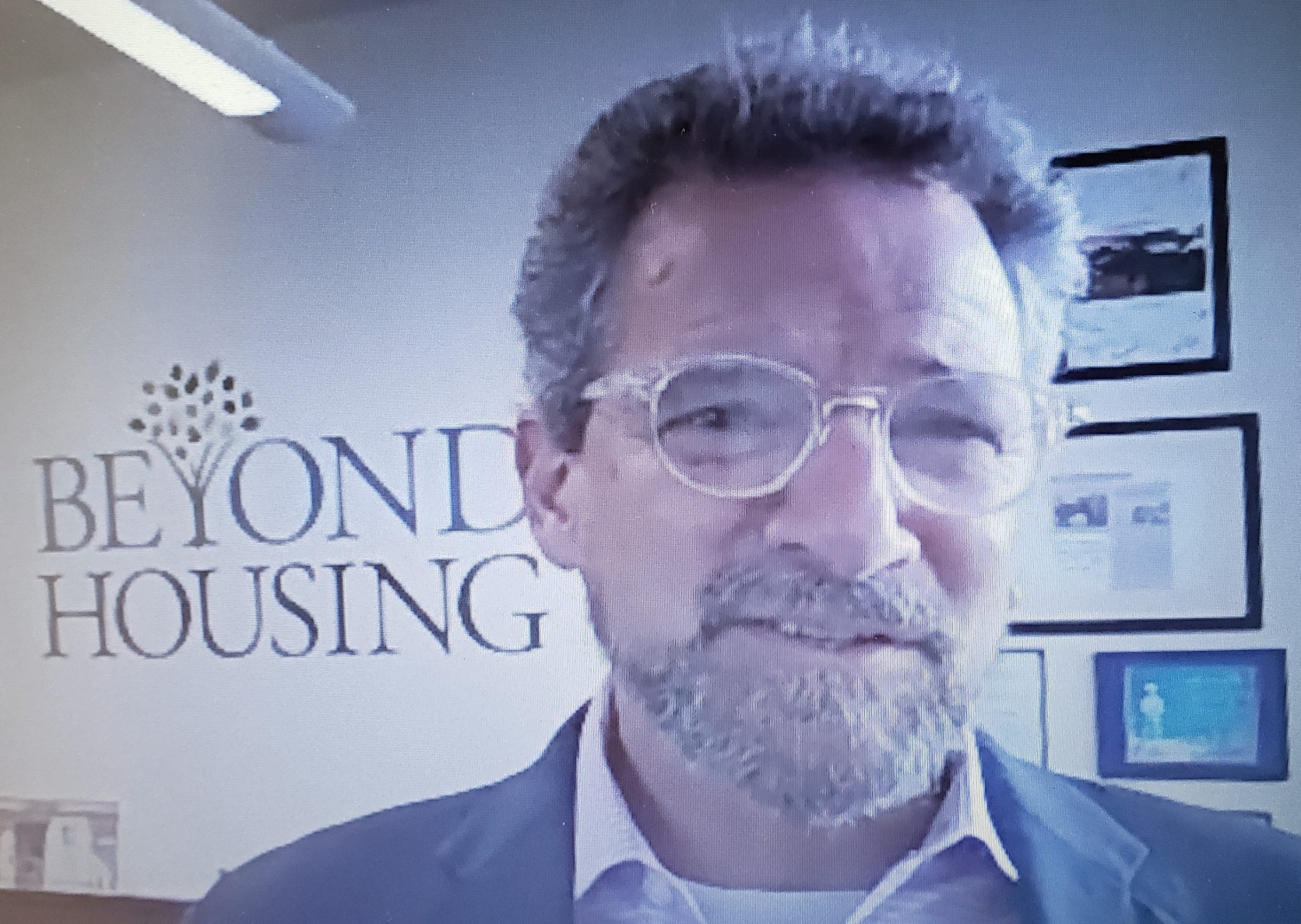 “If we want to be a prosperous and equitable region, we need to invest in areas where there has been no investment in decades,” said Chris Krehmeyer, president and CEO, Beyond Housing. The organization is founded on the simple premise that giving people a safe place to live also gives them the opportunity to achieve a successful life. Beyond Housing builds new homes, renovates houses, and helps with home repairs, primarily in the 24 municipalities within the Normandy School District footprint.

But providing a roof over people’s heads is not enough, Krehmeyer said. People need housing with access to retail, education, health care, job training, and employment opportunities. So Beyond Housing partners with other organizations to offer many supports for families and also improve the entire community. Its 24:1 Initiative has resulted in construction of a grocery store, a senior retirement center with full-service bank, a movie theater, and a health clinic and formation of a community land trust in Pagedale.

Krehmeyer identified the root of community decline. “We know what systemic racism has done to homes, neighborhoods, health care, and education,” he said. Reparations in the form of investment in communities of color would be appropriate, he said, responding to an audience question.

He urged us to keep pushing people to get out of their comfort zone and look at community funding in new ways. “All we lack is the courage; we know how to do the job.”

To learn more about Beyond Housing, visit www.beyondhousing.org

Lessons from a Legend 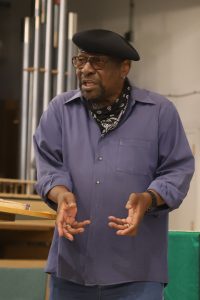 St. Louis activist Percy Green inspired more than 55 participants with his advice on how people of all ages can protest injustice.

In the 1960s, Green was a founder of the protest organization Action and scaled the Gateway Arch to demand that Blacks be given jobs in its construction. In 1972 he orchestrated an action at the Veiled Prophet Ball, which resulted in the unmasking of its symbolic head. He was the plaintiff in McDonnell-Douglas v. Green, a landmark 1973 Supreme Court case that established the basis in determining whether racial discrimination in employment has occurred.

In all his protests, Green adhered to a guiding thesis:

For older adults, Green recommends protesting with a “Boo Crew”: Attend meetings where controversial issues are addressed. When a speaker for the establishment says something untrue or dangerous, he said, stand up and boo loudly. Reporters will bring attention to the dissent by focusing on the booing. Orchestrate protests; have a spokesperson available to explain why you are protesting.

Protesters must know that civil disobedience can include the probability of being arrested, but Green maintains “it’s a good thing for advocates to be arrested” to learn how the criminal justice system operates. Most people don’t know about the system’s corruption and unfairness, he said.

An audience member asked about community influence in negotiations between their city and police unions. Green said unions representing working class people should denounce the use of the term “union” for police organizations. Historically, police have supported the goals of the wealthy, and are not tied to working people’s concerns. As the only group that can legally take a life, police should not be immune to prosecution, he said. He added that prosecuting attorneys are reluctant to challenge police abuse because they fear a campaign against them when they run for reelection.

For young people today, Green advised them to remember that demonstrations are effective when they disrupt and force people to think about new ideas.

He encouraged us with three reminders of why we must protest injustice:

A Conversation with Dr. Laurie Punch 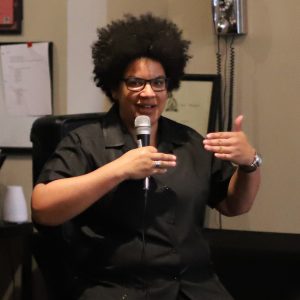 Our February 17 lunch program featured Laurie Punch, MD, associate professor of surgery at Washington University and newly appointed member of the St. Louis County Board of Police Commissioners. Dr. Punch said she accepted the appointment, which followed then Sgt. Keith Wildhaber’s discrimination lawsuit, because she wanted to bridge the disconnect between the police and the community.

She is responsible for educating herself for this different role, she said, especially as the board determines its priorities and will be hiring a new police chief. Thus, she reversed the meetings’ usual format and turned the floor over to the audience. “As a St. Louis regional citizen, what concerns you the most about the state of policing?” she asked. The large, engaged audience offered many ideas:

Police accountability: Participants called for transparency, access to reports, and accountability when police actions appear to violate the law. One woman said her community has no police board. Another said she would like to see police admit wrongdoing when it occurs. Another said that the county needs a better system for filing a complaint. Complaints are not responded to or are routinely dismissed, she said.

Training: The audience said police need training in de-escalation of conflict, trauma sensitivity, handling people with disabilities, and crisis intervention. A police academy trainer said accountability for training is needed. Trainees should be tested and made to understand the importance of the material for doing their jobs.

Community policing: “I want police to treat me as they did when I was a kid,” said an African American man. Police need to meet with all people in the neighborhood—not just “middle class black people”—to ask how they can help them, he said. Rather than seeing themselves as enemies, police and citizens “need to change images on both sides.” Inclusion: An audience member advised including a civilian on the county police’s new Diversity and Inclusion Unit to give the community’s perspective.

Recruitment: A woman said recruitment efforts should make it clear that being empathetic is part of the job.

Culture change: To applause, a man said the culture within the police department must change, enforced by disciplinary processes when necessary.

Docent Led Tour of “The Shape of Abstraction: Selections from the Ollie Collection”

On February 6, Women’s Voices members enjoyed a private tour of “The Shape of Abstraction” at the St. Louis Art Museum. The exhibit’s amazing artworks are part of a generous gift from St. Louis natives Ron and Monique Ollie. They celebrate five generations of black artists, many of whom were overlooked in the past because of racial prejudice. Docents Monica Mcfee and Bill Sitzer helped us appreciate the importance of abstract art in breaking down barriers between people and opening our eyes to new ways to view the world. To quote the words of poet Quincy Troupe, whose poem names the exhibit: “the shape of abstraction is what the mind believes it sees” and art “takes us to a place where imagination wanders, fills up space with magical, mysterious wonder.”

Learn more about the exhibit here.

Lisa Clancy, chair of the St. Louis County Council, and Laura Arnold, councilwoman of Webster Groves, updated the large audience on current efforts to address the lack of affordable housing in St. Louis County. Arnold spearheaded the Webster Groves “source of income” legislation which allows the city to pull a landlord’s license to rent for refusing renters with certain sources of income such as housing vouchers. Webster is also working on revising zoning rules, which are key to “how we construct our community,” she said. Possible changes would encourage developers to build affordable multifamily homes instead of continuing to replace small single-family homes with larger, more expensive ones. Lisa Clancy said the county’s new Affordable Housing Trust Fund has identified housing needs to be addressed by the county’s Housing Resources Commission. The trust fund has found that a fourth of the county’s 400,000 households are “cost burdened” — spending over 30 percent of their income on housing. Needs for affordable housing are greatest in North County, mostly for seniors and African Americans, she said. Both speakers said the region’s fragmentation impedes progress. For example, the Webster Groves source-of-income law does not encompass the entire county. They urged attendees to educate their own communities’ council members and mayors or serve on their cities’ commissions or councils. For information and help with serving on a city board: https://www.appointmentsproject.org/missouri/