Budget Blues and Other Sad Songs from Jefferson City 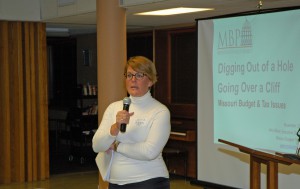 Missouri is headed over a cliff as it follows the lead of Kansas. Two years ago Kansas, following the advice of the American Legislative Exchange Council, which writes legislation for conservative state-level politicians, sharply cut income taxes. Kansas revenues took an 11 percent nosedive in 2014 alone. When Missouri’s SB509 goes into effect in 2017, tax cuts are likely to lead to results similar to those in Kansas. Missouri will face revenue losses of $640 million. In Kansas, after a predicted economic boom didn’t materialize to compensate for lost revenue, the state cut funding for K-12 schools by $300 a student, increased state sales tax and college tuition, and received a lower bond rating. Adams said tax cuts in Missouri, which ranks 37th nationally in elementary and secondary school funding and 44th in funding for higher education, will generate a shortfall in funding programs and services at even the same level they are funded now. 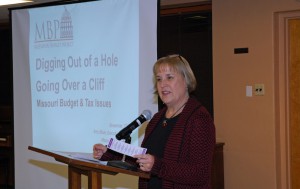 Missouri is already a low-tax state. “Missouri’s income tax rate is lower than that of 30 other states,” Adams said. Nationally, Missouri has the 25th lowest per capita income tax, the 45th lowest corporate income tax, and the 42nd lowest state sales tax. Missouri’s spending on services such as health and education is not impressive as compared to other states’. Missouri ranks 37th in spending on elementary and secondary education, and 44th in higher education spending, Adams said.

Elected officials have claimed that Missouri spends huge amounts for Medicaid. In fact, the state’s general revenue fund pays only 16.2 percent of the cost of the Medicaid program, Adams said.

The Missouri Budget Project, a nonpartisan fiscal analysis organization, has projected that Missouri would pay even less if it accepted federal funds to expand the Medicaid program. In the current Medicaid program, the federal government pays about 60 percent of the cost (the federal matching rate).The state pays 16.2 percent from general revenue; and the remainder is covered by funds collected from hospitals, pharmacies and other health care providers, the tobacco tax, and other sources. Under Medicaid expansion, the federal government will pay 90 percent of the cost for individuals newly covered under the expansion. Some of those who will be newly covered, such as visually impaired individuals, are currently insured by Medicaid. But the federal matching rate for these persons will increase to 90 percent, under the provisions of the Affordable Care Act. As a result, Missouri will pay only 6.2 percent of the costs of Medicaid from general revenue in FY2022 when the Medicaid expansion is complete.

By not taking federal monies to expand Medicaid and free revenues for other programs, the state deprives its citizens of health, education, and other services. Under the current system, many working people make too much money to be eligible for Medicaid but too little to qualify for subsidies under the Affordable Care Act. If Medicaid expansion is accepted, they will be able to get needed care. Adams explained the ironic current situation in concrete terms: A single mother of two making less than $20,000 per year has to pay the same amount for health insurance as a single man with no children making over $100,000 per year.

To get the General Assembly to take action to help Missourians, Adams urged audience members to talk with legislators, neighbors, and co-workers about the benefits of Medicaid expansion.

For more information, contact the Coalition for Missouri’s Future, the Missouri Medicaid Coalition, and the Missouri Budget Project.