At a packed meeting, we learned how gun violence is affecting all of us, no matter where we live. 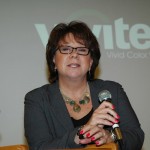 Capt. Janice Bockstruck, a  police officer for 27 years, said that in 2015 gun violence killed 178 people in St. Louis, a majority under age 25. Linked to gun violence is an ongoing heroin epidemic (321 overdose deaths in 2015). Heroin users are mainly white, middle or upper class youth, and they often pay for drugs with stolen firearms. With Missouri being a “right to carry state,” many guns are stolen from unattended cars, but heroin users also often steal guns from their families, Bockstruck said. 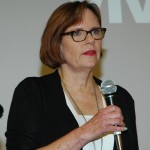 What We Can Do

Gun-related crime is everywhere, Bockstruck said, so everyone needs to be vigilant for suspicious activity and report it to the police. Often drug transactions take place in low-crime areas in public places such as malls and parking lots. She advised gun owners to keep a record of the make, model, and serial number of any gun they own in case it is stolen, and to buy a security safe to store a gun left in a car. “Any time someone steals a gun, it’s going to be used in a crime,” she said.

But Women’s Voices members can do much more to prevent gun violence. We can get at the root of the problem: children who are growing up without good role models and structure in their lives, or who are struggling with the toxic stress of living in unsafe environments.

Mentoring these children, Joyce said, can make a huge difference. “All of you have the opportunity to influence young people,” she said, by becoming mentors in programs such as Foster Grandparents, and contributing money to mentoring organizations. Our speakers’ message was clear: Early intervention is critical. As Joyce said, “You can’t police self-esteem into a 17-year-old boy.”