An Evening with Julian Castro 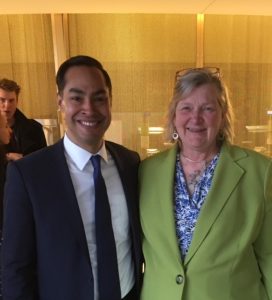 Bridget Flood, Incarnate Word Foundation executive director, said, “In his career in the public sector, Julian Castro exemplifies a commitment to respectful discourse as a path to building a civil, just society.”

The Incarnate Word Foundation and the Clark-Fox Policy Institute hosted an evening with Julian Castro, former mayor of San Antonio and Secretary of Housing and Urban Development under President Obama, on March 22.  The event was part of the foundation’s RECON project. Through this initiative, the foundation provides opportunities for people to reconnect and design creative responses to revitalize their communities. “The starting point is always dialogue,” Castro said. The most successful cities have learned to “connect the dots,” building relationships between the public, private, and not-for-profit sectors to improve the overall quality of life.

In today’s global economy, “we need to invest in people,” he said. San Antonio citizens were convinced to support preschool education by an effort that brought together residents, educators, and businesses. Castro said all citizens were involved in decision making:  “Leadership came from the bottom up, not top down.” 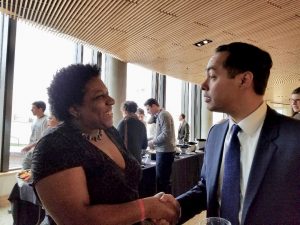 Referring to racial and economic inequities that “have relegated certain neighborhoods to second-class status,” Castro said cities should plan investments using “an equity lens” so that disadvantaged communities are enabled to thrive.