Inside Track: Medicaid Expansion in Missouri

Alan Freeman, director of the Missouri Department of Social Services 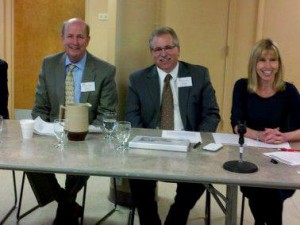 What are the chances that an additional 260,000 low-income Missourians will get access to health care starting this July 1? That depends on what happens in Jefferson City by May 10 – the deadline for Missouri legislators to vote yea or nay on our state’s option for expanding Medicaid coverage as part of the Affordable Care Act (ACA).

A panel of experts outlined what Medicaid expansion means to Missourians in terms of access to health care, state finance and business development. Each guest speaker addressed some of the complexities of administering Medicaid under new ACA regulations, of facing extreme financial challenges if the state rejects the option, and of navigating our way through the ideology and partisan rhetoric that followed the 2012 elections.

By accepting full Medicaid expansion, all Missouri’s Medicaid costs – for those 260,000 added to the program, plus those currently served by Medicaid – would be covered by the federal government through 2016. That translates to $1.8 billion in the first year alone, and close to $6 billion over the three-year period. After that, participating states will gradually pick up a 10 percent share of the cost.

Medicaid expansion has widespread public support (see Steve Renne’s presentation- slide 8) from healthcare providers, advocacy groups from urban and rural areas, and – because Medicaid expansion will generate an additional 24,000 jobs in 2014 alone – from a broad contingency of business interests, including Chambers of Commerce from West Plains to Cape Girardeau to Lee’s Summit to Hannibal. It also has widespread bipartisan support nationally, with only 35 percent of the population living in states where governors currently oppose the expansion.

“So if all these people are for the expansion, who’s against it,?” asked a WV member during the Q & A period. “Many candidates made opposition to ‘Obamacare’ the focal point of their campaigns,” said Kit Wagar. “But the ACA was upheld by the Supreme Court, and it’s here to stay. It’s difficult for those who opposed the law and President Obama to move forward on this.”

If Missouri does not opt for Medicaid expansion, the tax dollars Missourians have paid will go to other states to cover their Medicaid costs. Missouri’s low-income residents, businesses, medical providers and taxpayers will lose. That’s a heavy price to pay for the sake of maintaining political ideology.

Want your voice to be heard? “I want everyone to do one thing when you get home,” said Sidney Watson. “Call or write your State Representative and Senator and tell them to vote FOR full Medicaid expansion. It’s the right thing for the people of Missouri.”