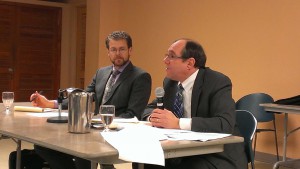 Daniel Glazier said that Legal Services of Eastern Missouri (LS), one of 150 legal aid organizations in the country, provides free services to clients that have incomes at or below 125 percent of the U.S. poverty level. LS receives 50 percent of its funding from grants and foundations, 20 percent from private donations, and about 30 percent from the federal Legal Services Corporation. The system was put in place about 50 years ago as part of the federal War on Poverty. Glazier said LS handles many types of legal issues, including health care access, domestic violence, children with special needs, immigrant support, and consumer issues. He pointed out that “we’re a long way from winning” the War on Poverty: 22 percent of U.S. children under 18 live in poverty and 30 percent of St. Louis residents are poor.

Thomas Harvey said Arch City Defenders (AC) [which was founded in 2009 by three recent graduates of Saint Louis University Law School], bridges the gap between the public defenders, who handle only criminal cases, and LS, which handles only civil cases, by providing their clients– primarily homeless people– with both types of representation. In addition, AC helps its clients access a broad range of social service support.

Harvey explained that because of “a cascade of events that are stacked against them,” AC’s clients, who are “in no way hardened criminals,” need help to get back into a home and on a path to recovery. For example, he said, most clients have suffered a similar pattern of events: Most have been fined for something (often traffic related) and have failed to appear in court because they don’t have any money. Then they have been arrested and jailed; and, with no money to pay a bond to get out, they miss work and lose their job if they have one. AC not only helps solves their legal issues, but also sets them up with such support as job training, substance abuse programs, and mental health services. “We provide holistic legal assistance so that our clients can get back to a level starting point,” Harvey said.

Much of AC’s funding now comes from the city of St. Louis as part of the Campaign to End Chronic Homelessness; AC is currently working with 178 people identified through this program.

In answer to audience questions, Harvey and Glazier said both their organizations need more resources and can use volunteers. A major problem they face is the lack of coordinated services and funders. Responding to comments that many Americans know little about the lives of the poor, Harvey suggested that people gain insight by visiting a municipal court in session, where all the defendants are poor and lack legal representation.

“We are dedicated to our clients, who have been jerked around in one court after another,” Harvey says. “The fact that we have to work a lot in our law offices is nothing compared to what our clients have to deal with every day.”