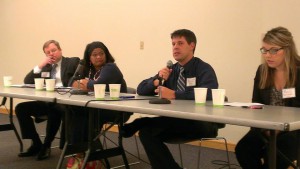 In a wide-ranging discussion, panelists explained the Affordable Care Act’s history and problems, and provided vital information about its future. Mr. Barker said that because of problems with the ACA website www.healthcare.gov, the rollout has been disappointing, especially in the 27 states that opted to use the federal marketplace instead of establishing their own. But in recent days, navigators (counselors who help with the application process) with the Cover Missouri coalition have begun to enroll people in insurance plans.*

In Missouri some low-income people whose incomes are too high for them to qualify for Medicaid will still be without health insurance because they are not be eligible for ACA insurance. The coverage gap was created because Missouri chose not to accept about $8 billion in federal money to expand Medicaid to cover more residents. Dr. Craig said people who fall into the gap can turn to Family Care Health Centers to find affordable care. These centers receive a federal subsidy to provide care on a sliding scale based on income.

The ACA is here to stay, and employers should plan now for 2014 changes in insurance plans, said Mr. Neville. Employers with 50 or more employees must make coverage available to their employees or pay a penalty, he said. Audience members asked insightful questions:

*Where to get help to apply for insurance online, order paper application forms, find a navigator, or learn more about the ACA: visit  www.covermissouri.org, or call 1-800-318-2596. You may also talk to insurance agents or brokers, or navigators at Family Care Health Centers.