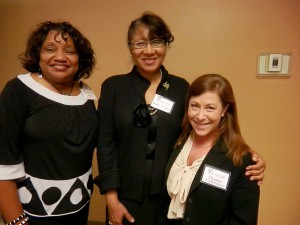 When the U.S. Supreme Court gutted Section 4B of the 1965 Voting Rights Act in June of this year, several states passed restrictions on voting rights. In fact, in 2013 three fourths of the states introduced legislation to make it harder to vote, said Denise Lieberman, senior attorney with the Advancement Project’s Voter Protection Program. The American Legislative Exchange Council (ALEC), a conservative organization funded by the Koch Brothers and other right-wing groups, has written much of the legislation introduced by legislators for the sole purpose of keeping people out of the voting process.

“These bills are highjacking our democracy,” Lieberman warned. “Voting is the essence of democracy,” she said, and “we are at a crossroads.” Many people and groups are challenging the new laws, and the outcome will determine if the Voting Rights Act still has teeth, she said. Missouri has introduced legislation requiring voters to present a photo ID, despite the Missouri Supreme Court ruling that the ID requirement would impose a substantial burden on Missourians’ free exercise of the right of suffrage, Lieberman said. She predicted that the legislation will pass.

The court’s decision in Shelby County vs. Holder struck down only one part of the Voting Rights Act– Section 4B requiring certain states with entrenched racism in their voting laws to clear any changes in their voting practices with the federal government before implementing them. Judy Draper, associate circuit judge, St. Louis County, said the rest of the Voting Rights Law remains in force. But, as Lieberman pointed out, lifting the “clearance” rule has resulted in egregious voting laws being passed in states such as Texas, Mississippi, Alabama, and especially North Carolina, which passed the most restrictive law.

Days urged the audience to volunteer to work at the polls and become informed about voting laws.

For more information on becoming a poll worker or other voting questions: www.stlouisco.com/elections
For information on voter protection: www.advancementproject.org