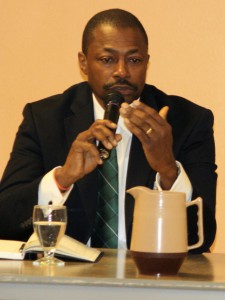 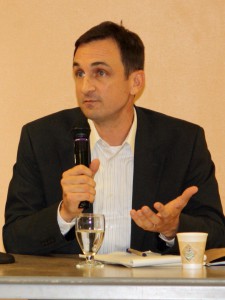 of the most important educators in St. Louis talk about the schools they run and their determination to improve education for underserved students in St. Louis.

Dr. Kelvin Adams was candid about the past problems of the St. Louis City schools, which were unaccredited several years ago because of problems with governance, finances and student achievement. Under the direction of a state-appointed administrative board for the past three years, the district has made great strides. It now has a balanced budget and may soon apply for provisional accreditation.

Kelly Garrett directs the KIPP Inspire Academy, a charter school affiliated with Washington University. Opened in 2011, KIPP Inspire now has 350 students in grades 5-8. The goal of a KIPP education is to prepare students for college and for life, Garrett said.

Charter schools differ from traditional public schools in several respects, the speakers pointed out, although both of them are supported by taxpayer dollars. Charter schools have more flexibility, and can schedule students for longer school days, half-days on Saturdays, and summer school. They are not unionized and generally pay teachers slightly higher salaries than traditional public schools.

“But this freedom is balanced by our requirement for accountability,” Garrett said. “If we don’t do a good job, we’re out of business.”

Dr. Adams stressed that he does not consider charter schools to be competitors. “Students and families are better served when they have a variety of choices,” he said. “We need all kinds of options for families, and this includes traditional public schools, magnet schools, charter schools and parochial schools.”