Five years after the murder of 20 children and six educators at Sandy Hook Elementary School, Newtown, CT, gun violence continues to take our children. So far this year, 33 Missouri children have been killed–some in preventable shootings in which they found unlocked guns, some in street violence. Each had a name and left behind precious memories. At the beginning of the meeting, Women’s Voices remembered each of Missouri’s lost children with a moving video featuring their photos and identifying them by age and first name. 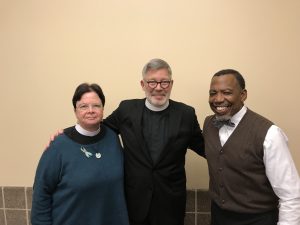 Charles Adams, former University City police chief, lost his 17-year-old grandson, Taylor Simpson, in a drive-by shooting near his school in University City on April 12 at 10:43 am. Taylor was a good student and “Nana’s right hand” to his grandmother, Dr. Joylynn Pruitt, former superintendent of University Schools. Chief Adams described the heartbreak of planning Taylor’s funeral—“something you’d never think you’d have to do for a 17-year-old,” and his entire family’s continuing anger and sadness. Although time heals somewhat, he said, “you never get over the loss.” Events such as Christmas or the child’s birthday are especially difficult, and unexpected things like a violent movie scene can trigger grief and pain.

As Bishop’s Deputy for Gun Violence Prevention for the Episcopal Diocese of Missouri, Rev. Marc Smith said his efforts focus on collaborative, strategic activities. The diocese has partnered with Women’s Voices Raised for Social Justice’s Lock It for Love program. Episcopal churches in Kirkwood, Eureka, and Cape Girardeau have distributed LIFL free gun locks, and Episcopal parishes have purchased hand-woven scarves to support the program. The diocese has worked with Washington University Medical School to provide education to individuals and groups dealing with victims of gun violence who are experiencing chronic post-traumatic stress and grief. The American Hospital Association selected the diocese to participate in its gun violence prevention activities.

The Rev. Kathie Adams-Shepherd, rector of Trinity Episcopal Church in Newtown, CT, at the time of the Sandy Hook tragedy, counseled many of her 800 grieving parishioners from 2012 until she moved to St. Louis in 2016. Calling for sensible gun solutions such as a ban on semiautomatic weapons, high-capacity magazines, and bump stocks, she echoed the frustration of the parents of Sandy Hook. “Many believed this shooting would be the tipping point [for gun control], she said, “but it wasn’t. Not one piece of federal legislation has passed in five years.” Almost 3,000 children and teens are killed by guns each year, she said. Paraphrasing a Sandy Hook father’s accusation, she said in America one person’s right to own a gun, even an assault weapon, is higher than a child’s right to live a life.