LOCAL VIGIL TO BE PART OF NATIONWIDE OBSERVANCES 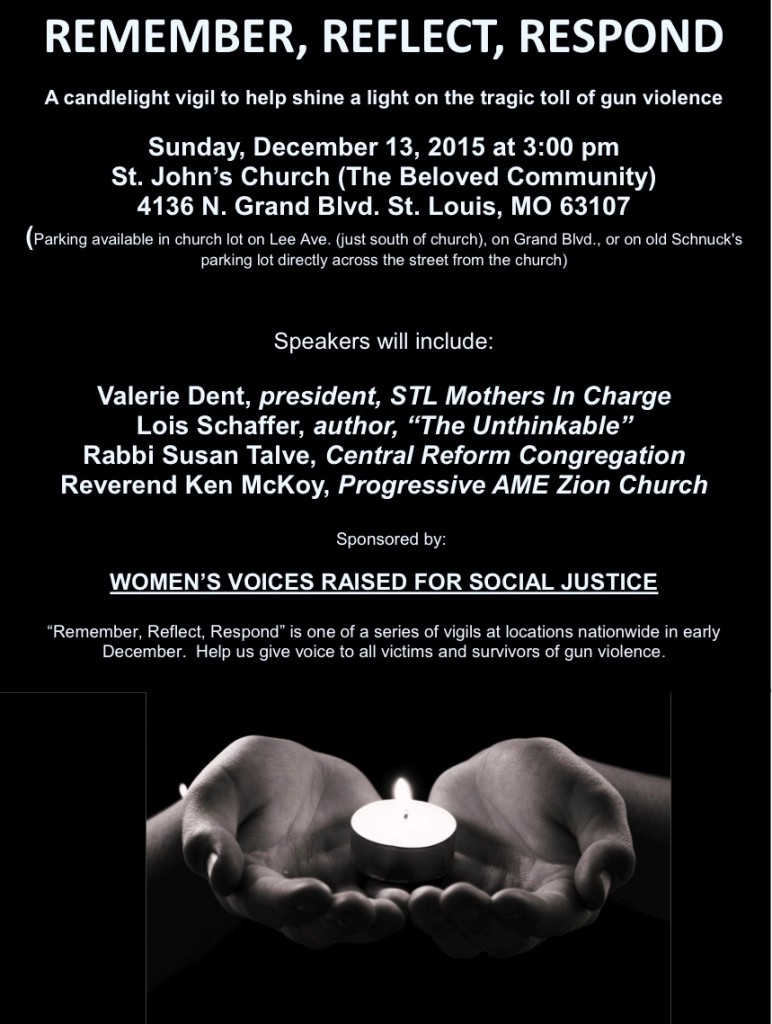 Vigils to raise awareness about the problem of gun violence and remember those who have died will be held across the country during the first few days of December.  In St. Louis, Women’s Voices Raised for Social Justice will sponsor an event on Sunday, Dec. 13, at 3 p.m. The theme of the observance will be “Remember, Reflect and Respond.”

“Gun violence affects all of us in St. Louis,” says Lise Bernstein, president of Women’s Voices Raised for Social Justice.  “We invite everyone to join us at this vigil to help us give voice to all victims and survivors.”

Speakers will include Valerie Dent, president of STL Mothers In Charge; Lois Schaffer of Long Island, NY, author of “The Unthinkable,” and the Rev. Ken McKoy, pastor of Progressive AME Zion Church.  Dent lost two sons to gun violence in St. Louis.  Schaffer’s daughter, Susan, was murdered in a home invasion in Creve Coeur in 2008.  McKoy’s 22-year-old son was shot last June in what McKoy called “the scariest day of my life.”  He survived, but still has bullets lodged in his body.

Following the event, the “Lock It For Love” program sponsored by Women’s Voices will have free gun locks available for families who have unsecured firearms and children in their homes.  Schaffer’s book, “The Unthinkable,” which chronicles the murder of her daughter, will be for sale.

Members of the Women’s Voices Campaign for Common-Sense Gun Solutions and the Racial Justice committee will be organizing the event, which will be one of a series started three years ago to mark the anniversary of the slaughter of 20 children and six adults at the Sandy Hook Elementary School in Connecticut.